Walking in the Sky 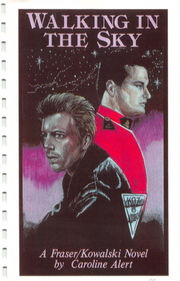 Walking in the Sky is a Due South slash 180-page novel by Caroline Alert.

The zine was nominated for the 2001 Huggy Awards (Best Due South Novel).

"Walking in the Sky is an adult publication and contains strong language and graphic scenes of a homoerotic nature. An AGE STATEMENT is required for its purchase. This publication will not knowingly be sold to anyone under 18 years of age."

Summary from Agent With Style:

... follows the aftermath of a brutal attack on Ray Kowalski, one that has left him questioning his manhood, his sanity and most importantly, his ability to love. Fraser is there, refusing to relinquish the lifeline he extends to his partner as he also deals with the helplessness, anguish and confusion of Ray's condition.

Once in a while you happen upon a writer who can so move you with her/his words that you just have to publish that work in book form. Such is the case with Caroline Alert and her ability to weave a tale.

In these pages you will enter the mind of Stanley Raymond Kowalski — such as it is — and stumble through a darkness of self-loathing and helpless torment brought on by his capture and subsequent torture at the hands of a perverse couple. You will struggle along with Constable Benton Fraser — a Canadian Mountie who first came to Chicago in search of...well, you know the drill — to understand his partner's odd behavior and roller coaster mood swings.

You will deal with each man's desires, hopes and dreams. You will laugh and you will cry. You will share their failures and triumphs. But mostly you will ache for both characters as they attempt to communicate their feelings to one another.

As publishers of this novel, we are proud to present the written words of Caroline Alert and the art of KOZ, whose moody illustrations capture the darkness of the story.

This zine includes flyers for Northwest Passage (and its proposed sequels), The Full Mountie, and the proposed zine called "Karma-Chi-Love Thing" (never published).

The zine contains many color and black and white illustrations by KOZ. Below is a sampling.

It's a h/c zine wherein the hurt isn't the emphasis, but instead the comfort is. The story begins after a brutal assault, and details the recovery of Fraser and Ray K. The art in color and line makes this digest a little expensive. [1]