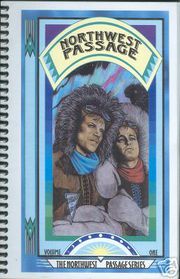 Northwest Passage is a Fraser/RayK slash Due South 282-page novel by TM Alexander with extensive interior color and black and white art by KOZ. It won a 2001 Huggy for Best Due South Novel. It is the first in a pair of novels.

From a 2001 Agent With Style blurb: This zine was originally to be "a series of five digest-sized novels by TM & PJ Alexander, illustrated by KOZ. These novels were to follow one possible direction that a fourth season (fifth season for Canadians) might have taken following the last episode of the series, "Call of the Wild." The main pairing is Fraser/Kowalski, but because the authors also love Vecchio, he does play a very viable and important role in every single novel."

Of these novels, only two were published.

The title novel and first offering of five in a series of the same name representing what we, The Presses, refer to as the 'Fifth Season' of Due South.

After getting past the 'Hand of Franklin' legend, Ray Kowalski reclaims his first name, Stan, and begins a new life with Fraser in the Mountie's grandparents' cabin just north of Inuvik. In spite of its ups and downs, in spite of insecurities and guilt, everything starts to settle into a perfect existence...or does it?

In Chicago, Ray Vecchio finds out the hard way that Victoria is back with a vengeance. And she's looking for Fraser. He takes off for the Territories to warn Fraser and Kowalski. While they find a way to deal with Victoria, Vecchio and Kowalski come to terms with their feelings about one another and about the man they both love in their own special ways.

The zine contains over 20 black and white and color drawings by KOZ. Below is a sampling:

Big, honking digest novel from TM Alexander and the Presses. It's the beginning of a series that promises to be fun. Points to the other for avoiding the borderline cliche of Ray V. hating the relationship of Fraser and Ray K. More points for not turning Stella into a bitch. [1]