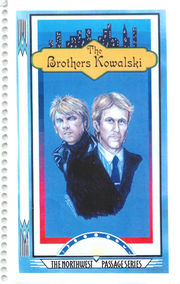 Brothers Kowalski is volume 2 of of a pair of slash Due South Fraser/RayK novellas written and published by TM Alexander. It is a slash zine published in 2002, digest sized and is 130 pages long.

It was edited by "The Alexanders."

"Kowalski is called back home to help his older brother (fact established by official DS presskit which never made it to the screen) out of a tight spot with the help of Fraser and Ray Vecchio."

From a 2001 Agent With Style blurb: This zine was originally to be "a series of five digest-sized novels by TM & PJ Alexander, illustrated by KOZ. These novels were to follow one possible direction that a fourth season (fifth season for Canadians) might have taken following the last episode of the series, "Call of the Wild." The main pairing is Fraser/Kowalski, but because the authors also love Vecchio, he does play a very viable and important role in every single novel."

Of these novels, only two were published.

Before I go into anything about The Brothers Kowalski, I wanted to announce that Northwest Passage — the first of this proposed five-novel series — took the Huggy Award for Best Due South Zine - Novel/Novella at ZebraCon 15 in October 2001. I cannot begin to express how proud and flattered I felt to receive the honor, my first Huggy ever and the first nomination and award for my Due South writing. I would like to thank everyone who voted. You do not know how much this meant to me, on a deeply personal level. Thank you all.

I can only hope to please the audience again with this, the second novel. Please note that I did not pen this one on my own; my partner in all things shares the byline. I think this was the first time PJ and I ever wrote something together for fannish consumption. Usually we'll brainstorm a little on something together and then I'll wind up writing it, adding to it and making changes. This time, we broke the story down into parts that she would write and parts I would write. (We're not gonna tell ya which ones, either.) At the end of the day, we'd marry scenes together into one document. When it was done, I went through the whole thing and smoothed the rough spots, made bridges, and hid the seams as best as possible. Hopefully, no one will be able to tell the difference in our styles and will find the entire story to be a complete and entertaining read.

This story incorporates a canonical fact about the Due South universe that sadly never made it to the screen. According to the official press kit for the show, Ray Kowalski was supposed to have a "successful older brother" for whom their parents showed some favoritism. Given many of the things that came out over the course of season three/four, we could see just where and how this could have been worked in. Everything from Kowalski's claims of being a disappointment to his father, to his "you never listen to me!" on the lakeshore in "Mountie on the Bounty" told us there was something going on that went unmentioned. We thought it would have made for a great episode to have the brothers work out their differences, but of course, that never happened...so when we sat down to plot out The Northwest Passage Series, we agreed that one of the stories would center on The Brother Who Should Have Been.

PJ is the person who taught me about "casting" original characters with actors. For the "role" of Michael Kowalski, we went with a person who we felt bore a strong enough resemblance to Callum Keith Rennie to make it believable — and after watching him in Brimstone, we knew Peter Horton fit the bill perfectly.

The next novel, Territorial Imperative, continues our post-series saga. Events foreshadowed in Brothers Kowalski will play out as Benton and Stanley continue to explore their new life together. As PJ promises, we will make a concerted effort to have the story out within the next year.

Thank you to everyone who continues to support The Northwest Passage Series. This was our way of refusing to let the show end. We hope people find this story as enjoyable as the first. Please feel free to drop us a line (ThePressesZines@cs.com) and let us know what you think — good or bad. Writers and artists need to hear more than just "that sucked" or "it was great, do more.