In The Sentinel fanon, Blair Sandburg's hair, along with his compromised lungs, is almost a secondary character. 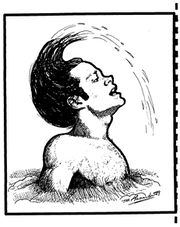 illo by TM Alexander from 852 Prospect #2

In fiction, Blair's hair is constantly described in great detail—there are many descriptions of its color, its texture, its smell, the way it fans out on a pillow (both in Jim's bed and in the hospital ICU), how Blair tucks it behind his ear, how he pulls it back in a ponytail, how it causes Jim to zone, and whether or not Blair cuts his hair if he decides to become a cop. 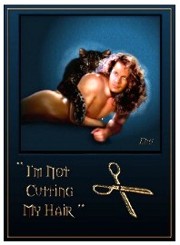 cover of the zine, "I'm Not Cutting My Hair"

The Sentinel became known as the fandom with the most warnings after a fan wanted to be alerted for a shorn Blair. This led to many stories including a "short-hair Blair" in their summary/story description; these warnings were almost always a tongue-in-cheek gesture.

The 2000 zine, I'm Not Cutting My Hair, features stories focusing on Blair and threatened haircuts.

The tradition of warning for Blair cutting his hair sparked a wider-ranging debate about the concept of warnings in general, and whether The Sentinel fandom was overly sensitive, or respectful, regarding fans' feelings and possible triggers.

Are you familiar with the background to the "Blair cuts his hair" thing? I know, it's awful the way it's constantly brought up. I guess I'm guilty of that myself, but it is actually relevant. It was one of the earliest debates about warnings in fandom, and it came about because of the exact issue we're all discussing: triggers from experience of sexual violence.

Sentinel fandom is kinda fetishistic about Blair and his hair; partly because there's (a small amount of) canon to support it. So the haircut thing isn't something you'd expect to see in a fic. Or wasn't, back in the height of the fandom. Blair is also the very stereotype of the abuse-magnet character; physically smaller than his butch partner, some "feminine" characteristics, intellectual and let's not forget attractive. So extreme hurt-fic involving Blair being abused was -and still is - very common in the fandom.

The fan who originally requested the haircut warning enjoyed hurt/comfort fics, but was herself a survivor of an abusive relationship. The haircut thing in a specific story triggered her, massively, in a way that descriptions of fictional rape and abuse never had. I heard the details of the incident she flashed back on second hand, so I won't repeat them, but it makes perfect sense of her request.

But, of course, if you just say "you've got to warn everyone if Blair gets a haircut" it sounds ridiculous. It's certainly true that no one, least of all the writer, could have anticipated a warning like that being needed, and I'm not advocating warning for every little thing. But far from derailing I think understanding the original incident serves as an example of why warnings are so necessary.[1]

I don't care that once upon a time someone demanded warnings for cutting Blair Sandburg's hair. In fact, if I never hear another word about Blair Sandburg's goddamn hair, it'll be too soon. It's a straw argument and it's derailing and I'm sick and tired of it.[2]

ratcreature, offered a detailed context to the debates:

I can't find the links for the history of warning debates that people who've been in Sentinel fandom for this bring with them, but in case you're interested I can try to explain where this "warning for haircuts" thing used as shortcut in debates comes from. Personally I think it's a bit misleading as reference, because even in the warning culture of TS fandom of that time, I don't actually recall anyone arguing it was more than what in today's terms would be called a "squick" they wanted to know about, but at the time in TS there wasn't always a distinction being made between warning, labels, even pairings and genre indicators.

TS the late 90s was centralized, both in lists and in archives on both the gen and the slash side (het was mostly non-existent), and all common publication venues to distribute fanfic outside of personal websites (and that included announcements of websites on lists, iirc) expected warnings, and provided examples what to warn about. These lists usually made no distinction between warnings for triggery things, kinks, spoilers, or some genres, for example the mail with the list rules of SXF, the major slash fic list, from 1999 said:

"Many people want to be warned about certain content categories, and courteous authors heed those wishes. We've tried to think of all the categories one can warn against, and they have expanded to include:

There is also the option to say "Other: see story notes", and then explain more fully in the author's notes. You may also choose "None"."

Most people used the "other" field for child abuse and eating disorders, iirc. While SXF had iirc a mandatory warning policy, the gen fic list Senfic in theory allowed to just warn that you don't warn, but few ever did that. Also the warning examples the Senfic list rules gave were framed thus:

"b) Warnings and Ratings

And no, you don't need to warn us that a story contains a high pollen count, and may be offensive to people who suffer from allergies. But many of the list members dislike reading a story and discovering that it is a death story, or some other topic that they wish to avoid. Warnings are a courtesy to your readers, so help them out when possible.

However, if you feel that placing a warning on your story will ruin the plot for some reason or another, or you object to the notion of warnings, then we ask that you label your story:

In order to let the reader know they read at their own risk. And readers, if you ignore a warning or a caveat lector - you did so of your own free will."

So on the side of the formal rules this wasn't actually all that overbearing as the reputation TS fandom got later might make it seem and haircuts are nowhere in evidence, but the social pressure at the time was a lot in favor of giving detailed "warnings" of all kinds (including as you notice above warnings for the mere inclusion of certain female minor characters in form of the "Cassie" warning). Of course as this is a more general labelling approach rather than something that makes distinctions between triggers or other content labels, people on SXF (the one above with the more specific checklist) sort of lobbied sometimes to get that list expanded, to make sorting through fic easier for themselves.

The "haircut" (referring to Blair Sandburg cutting his hair) stood for a kind of story that many people disliked, firstly because his hair was fetishized (think like Sheppard in SGA) but also because it stood for a position in a fandom kerfuffle about how the series ended, whether it was fair to Blair about Jim's behavior towards Blair, etc. as it indicated whether the author was pro or against Blair becoming a cop at the end of the series. Some people liked reading only stories that were positioned on a certain characterization spectrum and the haircut was a symbol for that. Similar to the TPM trend at the time to warn for stories that were canon-compliant in that Qui-Gon died, and thus a warning for a canon death became standard in TPM fandom, some TS readers would have liked to be warned if a story accepted the series ending.

Other people thought this was ludicrous and a symptom for everything they saw wrong in TS fandom at the time (there were overlapping kerfuffles over fanfic criticism, list etiquette and so on that led to certain camps and splits in the fandom) and used it as a symbol in return, to illustrate how they saw TS fandom as needlessly coddling and stifling in that everything was warned against to avoid upsetting readers in any way, on the flip side no negative feedback or even general criticism could be uttered because it might upset authors.[3]

Examples of Other Characters' Devotion to Blair's Hair

From Priorities by Sandra McDonald: "He tried to find Blair's familiar heartbeat, but hundreds of cardiac rhythms surrounded him from all directions and he only got confused at the loud beats. He knew the odor of Blair's herbal shampoo, but his sense of smell had been chancy since the ordeal at the ocean's edge and the smell of dust and smoke overrode everything else."

Blair and Jim make shopping for hair products a joint effort in A Rose by Any Other Name by LRH Balzer: "As they emptied the cart onto the conveyer belt, he grabbed at the shampoo. Herbal Essences. "Made with Rosemary, Jasmine, and Orange Flower in Mountain Spring Water." He fished around for the conditioner. "Made with Sage, Jasmine, and Soy Protein in Mountain Spring Water," he read. Tentatively, he sniffed at them both, his eyes looking beyond to meet Jim's. The smell was kind of nice. Like the gentle herb shampoo he used to use before the little store closed down and he couldn't get it any more."