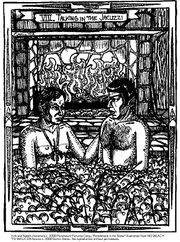 Kirk and Spock in a hot tub just talking, from the zine No Beach to Walk On by Gamin Davis

Gen Bathing gets characters into the shower, or bathtub, together for reasons other than sex.

The trope is usually employed as an off-shoot of hurt/comfort, with the emotional and physical comfort offered after bad dreams, emotional meltdowns, and physical injury. Both characters are portrayed as finding relief with this close contact.

Some fandoms with a particular interest in bathing are:

inside art from issue #3 of Independent Entity, by Martynn