In the BBC's TV miniseries Sherlock, Sherlock Holmes is a 21st-century incarnation of the famous consulting detective. He is played by Benedict Cumberbatch. 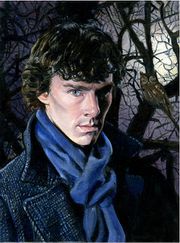 2011, art by Lorraine Brevig for the story "Chameleon" by velvet_mace, portrait of Sherlock oil on canvas board 12"-h x 9"-w

This Sherlock Holmes reflects some aspects of Jeremy Brett's iconic performance[1], but has unique characteristics. The character appears to be in his late twenties[2], much younger than most filmed versions, which usually cast actors in their 40s, 50s or even 60s. The BBC series also emphasizes both his social awkwardness (implied in some of the stories) and his genius. Most unusually, he is presented as lacking empathy, and it is implied that he has been diagnosed with a personality disorder, though this is subject to some debate by fans.

Well-dressed: Because the wardrobe department gave Sherlock such expensive clothes in the miniseries, fanfiction has invented various explanations for the discrepancy between his immaculate appearance and his careless lifestyle. Meanwhile, plenty of fans are merely thankful for the existence of Sherlock's coat: see Get Your Coat, a vid by HRS, and The Coat, an illustrated print story on index cards.

Since Sherlock says in canon that he is a "high-functioning sociopath", quite a bit of discussion and fanworks have come up analyzing and interpreting what this means and if it should be taken seriously. Some fans believe he does have a personality disorder ("sociopath"), others believe he could be on the autistic spectrum and possibly has Asperger's syndrome (which is how Benedict Cumberbatch says he plays him, and which John mentions as a possibility), and some fans think he's a neurotypical bastard or just an intelligent jerk. In the case of the latter options, his self-diagnosis of sociopathy wouldn't be taken seriously -- possibly because he misdiagnosed himself or because he just said it to make Anderson leave him alone. There's plenty of fic for all interpretations.

In one incident of discussion, LauraJV posted Sherlock and Not Autism on SherlockBBC LJ community, arguing that Sherlock isn't autistic. The post was met with much criticism, including accusations of fail and pseudo-psychology for her limited knowledge of Asperger's syndrome and mental disabilities. Subsequently, the mod invoked the tone argument in trying to tell people with disabilities to educate those without, which angered many people. The mod froze replies which was seen as hindering discussion and therefore the ability for others to comment on the policy of pseudo-education in the LJ community.

There's been much speculation about Sherlock's sexuality, especially due to Sherlock and John's awkward conversation in the first episode about their relationship status. When Sherlock says that having a girlfriend isn't really his "area", many fans interpret this as Sherlock possibly being uninterested in women and instead homosexual. Sherlock also says that he's "married to [his] work", and possibly either uninterested in a relationship, in sex, or he's asexual.[3]

Sherlock being asexual has quite a following in this fandom, including fic where he is in romantic but non-sexual relationships, usually with John. The LJ community Asexy_Sherlock was made mainly for a place for ace!Sherlock fanworks, though it welcomes all asexual characters from the show.

The ambiguity of Sherlock's sexuality is intentional: series co-creator Steven Moffat reportedly "always wanted to play on the confusion of Holmes and Watson's relationship and never intended to confirm either character's sexuality," though he also admits that he doesn't think there's "anything that suggests Sherlock is gay."[4]

Cumberbatch, who plays Sherlock, is also quoted as saying that Sherlock's relationship to John is ambiguous ("The ambiguity is fine") and a bromance ("[The Holmes/Watson relationship is] probably the first ever bromance").[4] Cumberbatch additionally said Sherlock is "very manly" as an implied possible reason for him not being gay, which fans were rather annoyed by.[3] Cumberbatch recently told IndieWire that "I've had asexuals come up to me and thank me for representing asexuals," but that Sherlock is simply "too busy to have sex."[5]

Steven Moffat also indicated in an interview that Sherlock wasn't asexual, which upset some asexual fans, particularly when Moffat claimed that an asexual Sherlock would have "no tension" and thus wouldn't be as interesting.[6] However, in March 2015, Moffat told Entertainment Weekly,

It’s a funny thing when a character for over 100 years has been saying, ‘I don’t do that at all.’ He’s been saying it over 100 years! He’s not interested in [sex]. He’s willfully staying away from that to keep his brain pure—a Victorian belief, that. But everyone wants to believe he’s gay. He’s not gay. He’s not straight. … People want to fantasize about it. It’s fine. But it’s not in the show.[7]

On the other hand (and much more to many fans' liking), co-creator Mark Gatiss has cited The Private Life of Sherlock Holmes (1970) as a personal inspiration for the BBC series,[8] and the director of that film stated that he had wanted to make his version of Holmes gay, but was forbidden by the censors.[9]

Gatiss said in an April 2015 interview that "[Sherlock] explicitly claims no interest in either sex."[10]

All of this of course raises the question of authorial intent and whether the opinions of Cumberbatch, Moffat, or Gatiss are relevant to what a fan sees on the screen. Nonetheless, many fans were quite happy that Mark Gatiss took over as lead writer for the second season.

Sherlock is most commonly paired with John Watson (see John/Sherlock), which is the most popular pairing in all Sherlock fandom. He's additionally paired with nearly every other character on the show.

Sherlock's frequent depiction as either asexual or disinterested in sex in no way hinders ships. Some fic depicts Sherlock as both asexual and in a romantic relationship, usually with John.