Benedict Cumberbatch is a British actor beloved by fandom mainly for his portrayal of Sherlock Holmes in the 2010s BBC series Sherlock.

He also appears as the dragon Smaug in the Hobbit films, as Khan Noonien Singh in Star Trek Into Darkness, as Peter Guillam in the 2011 film Tinker Tailor Soldier Spy, and the titular character in the MCU's Doctor Strange. He plays the young Rumpole of the Bailey from a series of radio plays of the same name in which Timothy West plays the older version of the character.

A fandom developed for the BBC radio comedy Cabin Pressure, in part, because he voices one of the roles: Captain Martin Crieff.

In RPF, he is frequently paired with his castmate in Sherlock and The Hobbit, Martin Freeman. However, on AO3, fics of Cumberbatch/Reader are even more common.

He is also a subject of tinhatting, as a contingent of his fans believe that his marriage and baby are fake.

His role as Doctor Strange makes him part of the Marvel Cinematic Universe.

In a 2012 MTV interview, Benedict said that Martin Freeman had introduced him to Tumblr and to slash of their Sherlock characters:

"I don't go seeking it, but Martin Freeman, who was an absolute luddite on the first series, suddenly came back from New Zealand having done a little radio short drama called "The Hobbit," he came back and he had this beautiful Mac [computer] with him and said 'Hey, look at this Tumblr.' And I said, 'What? Tumblr? What?' He knows more about it than I do and he was showing me some of them. Some of it is really racy, un-viewable even on MTV. It's cool.

I suppose my bodily proportions are quite flattering. I'm ripped, doing something I wouldn't normally do with my body, or having done to it, involving Watson. So that's as far as I'll hit about that one, but it's all there on the Web if you want to find it. I was amazed at the level of artistry; people have spent hours doing it. And there's some really weird cross breeding stuff that goes on. The news got out that I was playing Smaug in 'Hobbit' and suddenly there were lots of dragons with purple scarves flying around so it's crazy, it's crazy.[1] 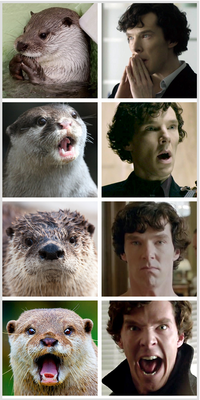 screencap of the original photoset, used with permission

This quickly garnered thousands of likes and reblogs and became its own meme, leading to comparisons of Martin Freeman to hedgehogs, Andrew Scott to rabbits, and so on.

A widespread meme even among non-fandom-specialized communities is the ability to mispronounce "Benedict Cumberbatch" in various absurd ways and still be understood.

While this meme has likely been around since the premiere of Sherlock in 2010,[3] it seems not to have gained much traction outside of Tumblr until 2013, probably due to Sherlock series two and the multiple popular movies Cumberbatch starred in in 2013 (Star Trek Into Darkness, 12 Years a Slave, August: Osage County, The Desolation of Smaug).