The Witcher is originally a series of six fantasy novels and 15 short stories written by Polish author Andrzej Sapkowski.

Set in a medieval fantasy universe, the series revolves around Geralt of Rivia, the eponymous Witcher. Witchers are fighters with the ability to battle monsters, using superhuman physical abilities and limited magical skills.

The books have been described as having a cult following in Poland and Central and Eastern European countries.[1] As of Dec 2019, they had been translated into 37 languages and had sold over 15 million copies worldwide.[2]

Numerous adaptations of the books exist, the most famous of which are a Polish television series (2002), a series of video games (2007-2015), and a Netflix adaptation (2019-). The latter thrust the universe's small fandom into the limelight and turned it into a major media fandom, with main pairing Geralt/Jaskier becoming a slash juggernaut.

The Witcher began with a titular 1986 short story that Sapkowski entered into a competition held by Fantastyka magazine, marking his debut as an author. Due to reader demand, Sapkowski wrote 14 more short stories before starting a series of novels in 1994. He wrote one novel a year until 1999. A standalone prequel novel, Season of Storms, was published in 2013.

Filmed and released in Poland in 2002, Wiedźmin a 13-episode single season suffered from criticism from the media and Western fans, who complained about possible fan subs in the plot and the CGI used in the show. Geralt was played by actor Michal Zebrowski.

However, the show also received strong acclaim for being accurate in close following of the book, acting/description of characters/actors, and music – this last important part of the plot.

Years later in December 2019 the first season of the Netflix series was released. Henry Cavill was cast as Geralt. Other significant characters are Yennefer of Vengerberg, Ciri, and Jaskier.

It inspired a resurgence and growth of the fandom. In feel and genre, the show is more "old school fantasy", contrasting with the Game of Thrones type of fantasy that was standard at the time of the show's release. This was largely a welcome change for viewers.[4][5][6]


okay but why must a tv show “make sense” or “have a coherent timeline”? is it not enough for henry cavill to fight monsters, sluttily?[7]

A second season was released on Netflix on Dec 17 2022. Whit the success of the first season led to a number of spin-offs being put in production by Netflix:[8]

Showrunner Lauren Schmidt Hissrich also hinted at the fact that the universe of The Witcher could keep expanding, including with media aimed at children.

In addition to shipping, the gen relationship between Ciri and her adopted parents, Ciri & Geralt & Yennefer, is often taken very seriously by all iterations of the Witcher fandom.

:See the shipping section for the specific tropes favored by each pairing, but there are some common themes across the fandom.

Interestingly, Geralt/Jaskier (or "Geralt/Dandelion," as he is often called by book/game fans) was much rarer, with only 34 works.

The Netflix show boosted the fandom enormously. Almost 31k works were posted to AO3 between the show's release and Feb 8, 2022.

Many of the characters paired with Geralt pre-Netflix series, except for Yennefer and Triss, simply did not appear in the 1st season of the show, while Jaskier was given a prominent role, a cute actor, and a lot of barely-disguised subtext with Geralt.

Smaller pairings and relationships include: 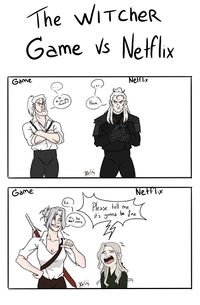 The Witcher Game vs Netflix by Belzebulbe 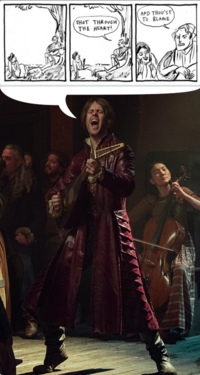