Reena Jenkins is a prolific podficcer and fan writer in a number of fandoms. She is particularly noteworthy for the large amount of podfic she has produced over the years and has been jokingly described as a "podfic robot" by awed bystanders on at least one occasion.[1]

While Reena Jenkins has produced a particularly large number of fanworks within Bandom, Teen Wolf, and the Marvel Cinematic Universe fandoms, she is also a significant presence within The Hobbit, X-Men: First Class, Stargate Atlantis, and Star Trek (2009) fandoms as well as others. Although Reena previously hosted most of her works at her livejournal, she now has much of her work stored on her AO3 account as well as under her name on the AudioficArchive. She is one of the podficcers hosted at Paraka Productions, a site run by Paraka.

Reena discovered podfic in 2010.[2] As of October 2018, she has over one thousand titles to her name on Archive of Our Own[3] and on the Audiofic Archive.[4]

Reena Jenkins has an enthusiastic, immersive style of podficcing that makes it clear just how much she enjoys the material she records. Her editing and audio quality are always reliably excellent.

Reena has also created a lot of cover art to go with her podfics, as well as for other podficcers. She has admitted to using Powerpoint as an image editing program.

Reena Jenkins has issued a Blanket Permission to Podfic statement:

I hardly ever write anything that's more than only vaguely ficcish, so I guess this doesn't help much in regards to podfccing... but if you do find that something I said or wrote and it prompts you to write a fic or record a fic or make some art, feel free to run with it. Just let me know when you're done, so I can oooh and ahhh over you, though. As for podficcing, I am all about the repodding. See something that I performed that you'd like to read, too? Go for it! In fact, I encourage it - my own voice tends to make me drowsy in long stretches, so it would be superfantastic to hear someone else read me a story ^___^ Again, feel free to let me know if we're podfic-twins (like birthday-twins, only we'll share podfics), so I can be generally excited in your direction.[11] 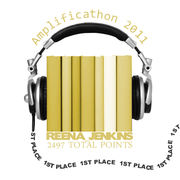 Reena was a guest host on Auralphonic Episode 23: Reflections on your body of podfic. (October 2016)