David Starsky is half of the crime-fighting duo Starsky & Hutch. He was portrayed by Paul Michael Glaser [1]. 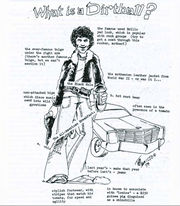 "What is a Dirtball?" by Todd Hamilton in 1979's Blond Blintz Bulletin

His Devotion to Hutch

While never specially stated in canon, Starsky's ethnicity and religion was assumed to be Jewish in fanon. It was, and is, a subject of fannish debate.

Some early discussion in 1979. All comments below are from S and H #4 and #5, responding to the the Discussion Topic "Is there any justification in aired S&H for Starsky being Jewish?":

Fan fic for Starsky focuses on his intense relationship with his partner. Other topics: a rough-and-tumble upbringing in New York City, time in the Vietnam War, the relationship with his brother, his grief and guilt after the murder of his almost-fiancee Terry, the ordeal of Hutch's near-death experiences, helping Hutch with various canonical misfortunes and emotional problems, his recovery from being shot in the last episode, and how he copes after his devastating injury.

Family and Background: Canon and Fanon