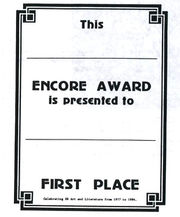 The Encore Award was a Starsky and Hutch award. It was awarded only once at The Paul Muni Special, a convention held on the ten-year anniversary of the show.

The choices were not restricted to any one year, like the FanQ Award, but rather to the entire catalog of Starsky and Hutch fanworks which at the time, covered eight years. The winners were referred to as "favorites" rather than "best."

Ballots were included in an issue/issues of the letterzine Between Friends, and the winners were announced at convention The Paul Muni Special.

In issue #10 of Between Friends, Carol Davis noted that out of 438 nomination ballots mailed, only 62 were returned so "if you don't agree with what has been nominated and you did not vote in the first round - I do not want hear about it."

As a way of celebrating the creative output of the fandom. we instituted the Encore Awards. so titled because everything eligible has already been considered for Huggy or other award nomination. It's been interesting to see what old stories are still best loved as well as the new pieces that have captured the readers' imaginations.