The Paul Muni Special was a slash convention held in Baltimore, Maryland to celebrate the 10th anniversary of Starsky & Hutch. Around 65 fans attended.

It was nicknamed "GloriaCon" because it took place in the middle of a hurricane.

It was the precursor to the many SHarecon conventions that followed. 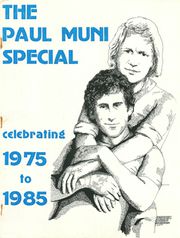 April Valentine, one of the convention organizers discussed the convention in an 2000 article written for the SHarecon 2000 fanzine: "In 1985, Starsky and Hutch fans celebrated the 10th anniversary of the show and in Baltimore we put on a con, The Paul Muni Special. It took place over about the same weekend as [the SHareCons that later followed], although there was a hurricane that time that added to the fun." [1]

Programming was informal and on a single track (See gallery below for the schedule). 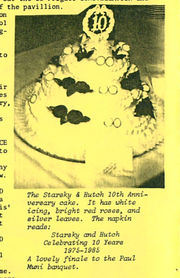 from Between Friends issue #12, the con cake!

There was a Video Room, and a Song Video Competition.

Some Contents of the Program Book

From the con's program book:

Welcome to the Paul Muni Special! It hardly seems possible, but this month marks the tenth anniversary of STARSKY & HUTCH. And here we are, gathering together to celebrate the occasion. We hope you enjoy the weekend and that it both brings back a lot of happy memories and helps you create some new ones. We're excited about celebrating not only the continuing interest in the show, but also the growth and vitality of the fandom. We've always been small, but as people move on, others join in and besides the old stand-bys and some folks we haven't seen in a while, we have a lot of newcomers with us this weekend. There are also a number of brand new zines premiering. As a way of celebrating the creative output of the fandom, we instituted the Encore Awards, so titled because everything eligible has already been considered for Huggy or other award nomination. It's been interesting to see what old stories are still best loved as well as the new pieces that have captured the readers', imaginations. In the back of the program book, we have included a complete listing of all nominated items, in non-alphabetical order and without any form of numerical indication. It's interesting to see which stories and poems and artwork have been selected -- and how many appear in multiple categories. (Nobody ever said we could all agree on everything!) We thought you'd enjoy looking over the list and wanted to be sure everyone nominated, even though they may not have made the final ballot, was given a bit of the well-deserved applause. Now, let's get on with the fun of renewing old acquaintances and making new friends. Eat your vegetables!

There were three progress reports, all printed in the convention program book for the gathering.

The convention's name came from an episode of Starsky & Hutch where Hutch calls Starsky's mother to find out what his partner's favorite dinner is and cooks it for him:

Hutch: Look at this. (Takes the lid off the dish, it's meat and vegetables)

Hutch: I called your mother up.

Starsky: You called my mother.

Hutch: Yeah, she calls it the Paul Muni special. (He pours the wine) Eat your vegetables.[1]

I went to the Paul Muni Special expecting a romp and a party, and it was all of that but so much more. I found the weekend deeply moving, an almost religious/spiritual experience. I feel changed by it, like I found some revelation or new understanding. One of the amazing things about this fandom I realized this weekend is that the caring and nurturing S&H give to each other, we have learned to give to each other; that the beauty in them lets us seek out and share forth the beauty in us and in each other; their friendship inspires the quality of our friend ships; their love, a love we can aspire to share and emulate. Fandom at its best is a warm, loving sisterhood of me and thee, a banishment of the separation and ultimate isolation that every human being experiences. On its bad days, we may kick out each other's canes and make fun of our friend's teeth (or ideas), but we're only human, as human and screwed up and fragile and complex as Starsky and Hutch on their worst days. But the partnership holds, because it's worth it. They're worth it, and we come to realize we're worth it....The art room had no bad art, only good, better, and great. The song video contest turned out not to be a contest but more of a mutual listening and appreciation, and the level of attention in the room was amazing, in turns serious, moved, and laughing out loud (in all the right places). The hotel was beautiful (I wanted to take my room home). I learned a lot, I laughed a lot, I leered a lot, and I cried a lot. S&H fans: it is a pleasure and an honor to be among you.[3]

Paul Muni Special. Great. Alot of fun. It was my first con, and I wandered around bewildered a lot, but it was good meeting the faces attached to the names. Thanks, everybody who voted for me for Best Short Story. (S/H). The reaction to that story has been a total surprise to me from the start. And thanks to Martha and Carol, my pals, for handling the con, if not with aplomb and dignity, then at least with a sense of humor -- which I prefer, anyway. They both conveyed their desperation with great charm, don't you think? Give 'em a big hand, folks. Continuing a tradition is one thing, creating a legend is something else.[4]