Terry Roberts (sometimes "Terri" or "Teri" in fanfic, last name was "Reynolds" in the script) is a canon one shot character who appeared in the episode "Starsky's Lady."

She is shot in the head by bad guys as an act of revenge against Starsky, pay-back for the results of an earlier case. The bullet doesn't kill Terry immediately; her doctor tells her she has less than a year to live. This gives her some time to go to an amusement park, play mini-golf and Monopoly, and make arrangements for her own passing, namely wrapping up some gifts for Hutch and for Starsky.

Terry is very popular in fanworks, mostly due to her seemingly never-ending patience with Starsky's job and her understanding of the close relationship between Starsky and Hutch.

Terry is the only woman to whom Starsky proposes marriage; it is unclear if she says yes. Starsky mentions her in a later episode, "Partners," telling Hutch he didn't think he had the strength to remain on the planet after she died.

Some Canon Facts About Terry

Terry Sets Up a Seminal Scene 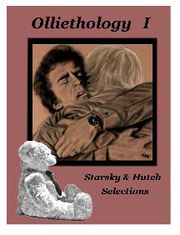 Terry is the instigator behind the episode's moving tag. In this ending scene, Starsky and Hutch play Monopoly while sitting on the kitchen floor. Both men have obviously had a little too much to drink. Starsky reaches into a cupboard and pulls out two wrapped gifts, things Terry had asked them to unwrap after her death. The gift to Starsky is a book. The gift to Hutch is her teddy bear, Ollie, along with the note, "To you I entrust Ollie and Dave. Please love them both, and don't let either one of them change."

This scene is captured in the very early vid, The Rose, which is customary to show at Starsky and Hutch cons.

Terry as Portrayed in Fanworks

Despite being a serious love interest and therefore having the ability to alter the close relationship between Starsky and Hutch, Terry is almost always portrayed in a positive light. Her death by the time the credits roll certainly dictates much of this adoration, but much of it also comes from the clear admiration she has for Hutch, and Hutch for her.

In fanworks, Terry often appears as a ghost, helping Starsky throught a difficult time or by giving her approval to Hutch to "love" Starsky in an intimate way.

There are some fans who don't feel an adoration for Terry, saying she is too nice, too understanding, is passive-aggressive (citing the "Big Slide Speech"), and that one reason she achieves sainthood is that her death ensures she isn't around long enough to have any real faults.

Some fans feel Terry's middle name might be "Sue," as she is almost too-perfect for words. "St. Terry as a wife? I could never take her too seriously. Her obvious function was to die sweetly and lingeringly..." [1]

Terry is almost always paired with Starsky. There are a tiny handful of Starsky/Terry/Hutch fics.

The Rose is one of the earliest songvids made with live action TV footage. It is also one of the earliest Starsky & Hutch fan vids. In this vid, Kendra Hunter and Diana Barbour timed a single unedited clip from the episode Starsky's Lady to the song "The Rose" by Bette Midler. One thing to note: this vid is about Starsky & Hutch's reaction to her death and about each other; Terry does not appear in it.

Despite her very high fiction profile, she is non-existent in art.