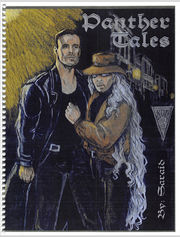 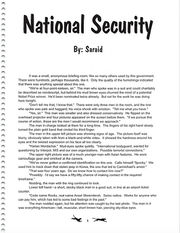 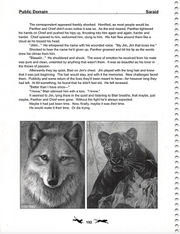 Panther Tales is a 194-page AU novel by Saraid in which Jim and Blair have been tortured by the government and become mercenaries. It has an inspired prequel, No Surrender. It also inspired Legion's Storm Signs trilogy.

Panther Tales is a non-profit publication of Agent With Style and does not intend to infringe upon the copyrights or copyholders of anyone connected with The Sentinel. No bribes of a CD player installed in the van so I can used the cigarette lighter for my cellphone, a cold Tab when I need it most or a gold watch that stops time were offered. Dammit. Enjoy! Laugh! Cry! Send LoCs!

Prior to the zine publication the series was posted online over a period of time. It has seven parts with the last one having been exclusive to the zine when it was first published. (The others were offline for a while to encourage zine sales.)

There also was another short story in this series, "Reasoning," a 9/11 reaction snippet (posted on 23 September 2001 to SXF).

Here we find a Jim and Blair that are twisted versions of themselves, and are now known as Panther and Chief. What torture has brought them to this state, what depth of their love for each other has brought them through it, and what will they do with their lives now? Caught between rage, mysticism and necessity, the mercenaries Panther and Chief struggle to survive in a rough world, sometimes with only their soul-deep love to keep each other safe.

Panther Tales are a wonderfully dark, intense, gripping series of stories about an alternate sort of future for Jim and Blair.[1]

I haven't been able to make myself read this series a second time, its just too sad. But its so damn good. [2]

I just finished reading most (I've heard there are more in a 'zine) of Saraid's "Panther" stories. They disturbed and enthralled me. I was especially disturbed by how attractive I found the prospect of such a *damaged* Blair (I feel like I should be ashamed of myself "g"), but I think I've been wanting to read something along this line. Do any of you have more electronic copies of this series that you would be willing to email to me? I've read: National Security, Human Dignity, Tribal Lore, Honor Bound, Blood Ties, and Blind Justice. [3]

what i like about pairing those two AUs is that sairaid made me care and be angry for panther and chief. i wanted to help them, fix them, while i was reading the story. and then Legion came along and offered a fix - it was so very *satisfying* that i could forgive both of them for just about *any* mistakes they might of made. and i get so caught up in the story that i can't find many, so i don't get annoyed:) [4]

Panther Tales is really unique in many ways. Huge guilty pleasure for many of us, as is Susan Foster's GPD series. They have a functioning damaged Blair. [5]

I initially threw it against my bedroom wall during my first read through. Then, almost like the watching a dreadful vehicle accident, I couldn't get it out of my head. It's a difficult read (including some truly awful editing) but it still haunts me. [6]

Sentinel and Guide had been captured, tortured & experimented on by agents of their own government, as well as Stephan Ellison, who was direly injured in the escape they effected after many months of horrendous treatment. Stephan reunites with his fiance, and they make the best life they can, considering that the injuries he incurred during their escape are permanent. Jim and Blair aren't nearly as lucky. Permanently on the run, Blair stripped down to the basic empath and Shaman at his core, Jim hires himself and his partner out as mercenaries going under the names of Panther and Chief. They build a network of friends and allies, a few from their past, many more from the allies they acquire on their travels. Some of them owe Panther and Chief more than they might ever repay. But will any of that be enough for them to build any sort of life? [7]