From Fanlore
(Redirected from Storm Signs)
Jump to: navigation, search 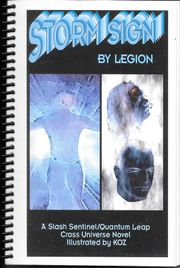 Storm Sign is a Quantum Leap/Sentinel slash crossover novel by Legion. It is 267 pages long and digest sized. It is illustrated by KOZ.

This story is part of a collected edition of the whole series in the zine Storm.

Summary from a distributor, Agent With Style: "A stand-alone prequel to Saraid's "The Panther Tales" Universe, wherein Jim and Blair, for reasons unknown, were tormented and tortured until they were transformed, much against their will, into ruthless, violent mercenaries who killed when necessary, hiding who and what they had been from everyone except a trusted few, presenting only a united front of Panther and Chief. In Storm Signs, a prequel to Saraid's stories, Legion explains what happened to Sam Beckett and Al Calavicci after the last episode where Sam leaped as himself, giving Al's first wife Beth back to him, as well as giving Jim and Blair a life filled with joy despite their eventual transformation into Panther and Chief."

From the online posting:

This all started with a single mental image: Jim, Blair and Simon sitting at the table in the loft, a slip of paper fluttering from Jim's fingers which said, "They know you're a sentinel. Take Blair and run."

That was three novels ago.

And more years than I want to admit to. So much has happened in that time that the back story for the stories is almost a novel in and of itself. I won't bore you with details unless you ask me for them, and I advise you to be comfy, drink in hand, when you do. It'll take a while.

Like any other project, this one would have been impossible without beta's, editors, artists, and friends who took the time to get comfy, drink in hand, and listened to me rant. I wish I could thank them all individually, but then that would fill a good sized zine by itself. There are three who must be mentioned though, because none of it would have happened without their help: saraid, who not only let me play in her Panther/Chief universe, but encouraged me and answered my endless questions; the ladies of the New England Gather who let me talk story with them when I was stuck (Man, I miss you guys), and my husband of 26 years, who even beta'd for me, as long as it wasn't the 'messy bits.'

I also want to give a special thanks to Hisstah, who asked me the right question at the right time, inspiring me to re-edit the first two stories and write the third one. I love the painting, lady, and yeah, there might be a fourth story someday. *G*

This is a digest-sized zine despite it's length of 267 pages. It has been edited by The Presses and therefore you'll find 7 gorgeous b/w and 3 equally wonderful color illustrations inside! Ahh, the treat! Spiral binding.

The story has been written to set things right: A particularly depressing set of short stories - saraid's The Panther Series, where ten months of terrible torture turn Jim into a rage-filled killer and render Blair blind and quiet, stripping both of all the character traits they had ever possessed - made Legion step into an exciting world of two pairs of lovers who, by helping each other, fight the evil the fates dish out for them.

Because, thanks to Dr. Sam Beckett and his quantum leap accelerator, in Legion's universe the capture of Sentinel Ellison and his Guide Sandburg is prevented - both men can escape and vanish for more than a year. But then Al Calavicci, former partner of presumably dead Sam Beckett needs help to deal with the same evil forces that killed Sam. He finds it in Jim and Blair - who on their journey finally discover that their bond is more than just about friendship... And this discovery leads to interesting developments.

This is not a typical Legion-story (not like her Too Hot To Handle series at all). This is a well-plotted, in-depth, terrific Grand Novel that - even though its premise twists the characters of Jim and Blair - shows Sentinel and Guide as we know them, bantering, easy-going and hard as steel - not necessarily pun intended. The novel interweaves two shows seamlessly, seemingly without effort, and gives you a really good read. [2]

I started to read this, but am not going to finish at this time; though probably will do so in the future. I wanted to make a comment I hope will prepare other readers.... If you don't know Quantum Leap, you may get lost! Well, as least *I* did. I've never seen Quantum Leap and don't know the first thing about it and I just didn't feel like I was following the story at all. There was nothing wrong with the writing, after all, this is Legion! But there where quite long portions with the Quantum Leap guys that went into things I hadn't a clue about. I did try to just skip to the Blair 'n Jim parts, but I wouldn't recommend that as their story is too closely woven with that of the QL guys. This is just my opinion. Maybe if you even have an inkling about QL you will fare better than I.[3]

This is a QL/TS crossover, and in it, Sam Beckett puts right what once went wrong for Jim and Blair. NC-17. ARCHIVIST'S NOTE: This is a very long story; I have seperated it into four parts for easier downloading. Or you could download the novel in its entirety as a zip file.

Legion is one of my favorite authors from the Sentinel fandom, so when she first posted part of a TS/QL crossover, I got very excited -- not to mention frustrated, because it ended on a huge cliffhanger! And that was the last I heard of that story for a long time. Until, finally, not all that long ago, she posted a much expanded version of that long ago story snippet -- Storm Signs. I dove into it with great delight. It has a long, complicated, but ultimately satisfying plot, a plot filled with action and energy that kept me on the edge of my seat. The thrust of the plot causes her to make some changes to the main characters -- but the way she does that preserves the heart of those characters. No matter what external changes she may make, she stays true to the characters' soul. Sam, Al, Jim, and Blair are all recognizably themselves. And she also manages to suffuse the relationship between each couple with a love and tenderness that jumps off the screen.

Winter has officially arrived, and the days are getting colder. I recommend curling up in front of a nice, warm fire with a mug of hot cocoa and a copy of Storm Signs. Sit back, relax, and enjoy the read! [4]

I read and enjoyed Storm Signs without having read Panther Tales first, although I have now. All you really need to know is that Panther Tales Jim & Blair were tortured and changed into people very different from canon or the usual fanon. Science fictional as you'd expect from a Quantum Leap crossover. Lots of angst, but Legion provides a happy ending. My main problem is the Quantum Leap stuff - it's not a fandom I'm familiar with and Dean Stockwell (name?) is not the stuff of slashy dreams for me, but ymmv. [5]