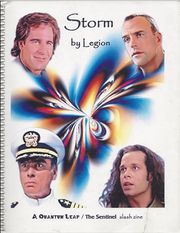 Storm is a 350-page crossover slash novel in three parts by Legion. It contains 114 pieces of art by Lilac.

The Storm Signs trilogy was inspired by Saraid's Panther Tales, i.e. in this Sam leaps to prevent Jim and Blair from becoming the rather broken Panther and Chief from that series.

Summary from Knightwriter: A horrific life awaits Jim and Blair if things don't change, but the only man who can change the future, Quantum Leaper Sam Beckett, is long dead and mourned by his old friend, Admirral Al Calavicci. Or is Sam dead? Jim and Blair receive warnings, Al receives hints his friend may still live, and things begin to change. But is it enough, or does another enemy lurk in the wings? And how could Sam be alive, and where? J/B, S/A only. Some graphic violence/sexual torture, but plenty of romance, spiritual growth and love that crosses Time. No kink.

The story is one of Legion's best. It's a complicated romance as well as a complicated mystery/science fiction tale, based on theories of how time might work, and with spiritual overtones that raise subtle questions for the reader. it is not preachy, but continues the themes of Good and Evil that were part of Quantum Leap. Lilac did 104 illustrations for this novel, not just photo manips, but real illustrations as photocollages that enhance the book. It's almost a graphic novel, a one of a kind book unmatched in any fandom. [1]