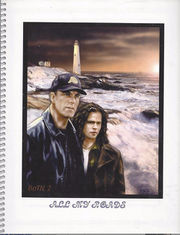 All My Roads is a 206-page slash Sentinel novel by Candy Apple. The cover and interior art is by TACS.

It is part of the Best of the Net series.

It was first published in 2000 by AMC Press. In 2018, it was reissued in print and PDF by Requiem Publications.

Blair struggles to find the right path for his professional life, and both men face challenges in their life after the press conference in “The Sentinel by Blair Sandburg.” They leave Cascade, and end up in Maine, where a murder case is only one of many obstacles. [1]

[print zine]: As always, Candy's story in 'zine format combined with TACS creative art is a wonderful addition to any 'zine collection. I've read my copy three times. It's a wonderful first-time love story. Whenever I'm feeling blue, for some reason this 'zine always makes me happy! [2]

This NC-17-rated story deals with the aftermath of the episode “The Sentinel, By Blair Sandburg.”

Set a few weeks after the final episode, we find that Jim and Blair beginning to come to terms with the results of Blair’s public confession of fraud. The excitement has passed, the show is over and Blair is left with the mournful task of putting away the reminders of his sacrificed career and ruined reputation. He must now deal with the day-to-day results of his decisions. Finding himself unable to secure a job because of questions about his honesty and integrity, Blair finds himself pushed toward accepting the offer of a job at the Cascade P.D.

Blair is not alone in his misery. Jim himself suffers the daily torment of guilt over Blair’s sacrifice. In one scene Jim tries to forestall what he knows will be unforgiving harassment from the other cadets at the academy. Jim puts himself on the line by insisting on becoming Blair’s instructor, willing to provide Blair with all the physical and ammunitions training he needs to pass the tests. We can see Jim’s protective attitude when it comes to helping Blair train, yet it does not come across as coddling or overwhelming. When Blair’s aversion to guns becomes an issue, Jim respects Blair’s final decision to drop the course entirely even though they are both disappointed. In this scene I was struck by the fact that Jim always treats Blair as an equal and takes his concerns as seriously as he would his own. The writer does a wonderful job of showing us how Jim is supportive and loving in his own, quiet way. We may not have had too many opportunities to see this side of Jim in the episodes, but the author shows us that it was always there.

This isn’t a story about quick fixes. We follow Jim and Blair for over a year as they struggle to carve out a life that satisfies both. They must also deal with the reactions of family and friends as they break the news that they are now a couple, the struggle of making ends meet and their anger at having to change their lives because of Naomi’s actions. None of these issues are forgotten, and the author gives the characters the time to deal with these while they are faced with new challenges. By allowing the story to take place over a long period of time, the actions and emotions of the characters have a true-to-life feeling.

The writing flows smoothly, and we are allowed to follow the story through the character’s thoughts and feelings. There were many surprises sprinkled throughout, which made the more mundane, quiet times that Jim and Blair share feel like a welcome respite instead of dull or boring. I was very satisfied with the conclusion, having watched Blair comes full circle from been seen as a social outcast to having redeemed himself in the eyes of society. [3]

I've read this so many times I really should get another copy. With spiral binding. <G> Really neat way to treat the post TSbyBS issues. I'm touched each time by how Jim gives as much as he can back to Blair after Blair lost his career and reputation. I love how patient Jim is in their new lives, even when it's really not who he is. Or who he should be. And I love how they rebuild their lives. I love all the sub-plots going on. It just feels like a story of life: sacrificing, loving, living, hopes, dreams.... Sniff. Love it. [4]

[online version]: This is one of the best relationship stories ever written; a long, slow stumbling towards healing. After the dissertation mess destroys Blair's career and his life, Jim gives up being a cop to help Blair run a bed and breakfast while Blair gets himself together again. What's amazing here is the realistic balancing that couples do, taking turns putting their own needs on hold for the other, getting annoyed about who has to do chores, trying this or that until they dig themselves out of trouble again. The story is in multiple parts and is the fourth one down on the page. [5]

[online version]: It's so nice to be reminded of some of the 'older' fics like this... I love a good long read, and I'd forgotten all about this one. Thanks! [6]