Best of the Net 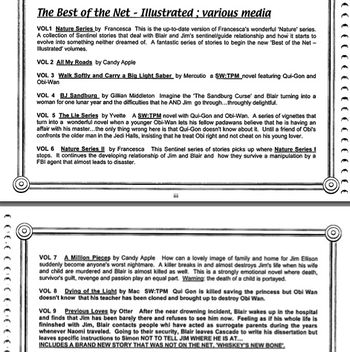 Best of the Net zines available as of May 2001, from a ad in Borders

Best of the Net (also known as "Best of the Net Illustrated" or "BotN") was a series of slash mostly unrelated fanzines published by AMC Press. The series was intended to showcase fan fiction that had previously appeared online in a fanzine with spiral binding, color covers and interior art. The total number published appears to be fifteen.

NOTE: There are two issue #7s and #9s and #10s. To add to the confusion, not all dates line up. To further snarl things, some volumes are inconsistently labeled in flyers. [1] [2]

The Good Friend (May 2000) and The Diary Series (February 1999) were at one time planned as a part of the series, but it is unknown if they were, in the end, included.

I don't see that the value I get for my buck is from word count, or how much white space there isn't, text size, etc. I'm paying for a story (stories). I can feel disappointed in nicely formated 'zine with a good word count (Crossroads, for example) whereas I'm thrilled to death to pay for something poorly formated such as the AMC press' "Best of the Net" 'zines. [4]