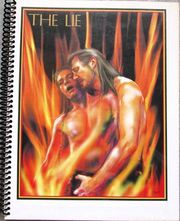 The Lie is a 181-page The Phantom Menace slash series of vignettes turned into a novel by Yvette. It has a color cover, color interiors, b&w art by TACS and is 172 pages and was published as "Best of the Net, Volume 5".

The Lie first appeared online and was posted to the Master/Apprentice Fanfiction Archive in 1999. Agented by Requiem Publications with print and PDF ezine available as of 2018.

Summary: "Padawan Kenobi says something innocent that leads his fellow peers to think that Obi is having a love affair with the 'Great Qui-Gon'. The prestige he finds this gives him (plus the fact that Qui-Gon is off planet for two weeks), makes him reluctant to set everyone straight, however when the Jedi returns and an old lover (but now, friend) of Qui-Gon shows up on at the Temple, one of Obi's friends takes it upon herself to tell Qui-Gon what a terrible person he is (to his face) for dumping Obi. This doesn't go over too well with the Master."

From the former distributor, "Obi-Wan lets his fellow padawans believe he is having an affair with Qui-Gon, only the master doesn’t know about it until a friend of Obi’s confront Qui-Gon and insists he stop cheating on his young lover."