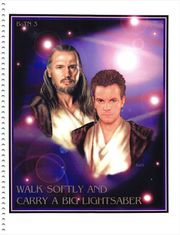 Walk Softly and Carry a Big Lightsaber is a Phantom Menace slash novel by Mercutio focusing on the Qui-Gon/Obi-Wan relationship. It describes the journey from Master and Padawan to becoming two lovers. Obi-Wan knows what he wants and Qui-Gon is afraid to face his feelings.

The story was published to net in 1999, during the first months of TPM fandom when the fandom swallowed every other slash fandom out there, and in 2000 the novel was republished as a zine by AMC Press in their Best of the Net series as Volume 3. The online novel has a word count of 73,000 and the zine has 200 pages. Agented by Requiem Publications with print and PDF ezine available as of 2018.

Summary: What would a Jedi apprentice really do if he discovered he was in love with his master?

Recently, Mercutio wrote a long Star Wars slash story called "Walk Softly and Carry a Big Lightsaber". The UST in that tale was...incredible. The sexual resolution was drawn out over several chapters. And I was never bored. Not once. I loved every word of it--because the sex was there for a reason, and it was necessary. It wasn't an interruption at all, it was simply part of the story. That kind of NC-17 I like--and I wish I had the skill to write it. [1]

The title doesn't suck, but it's completely misleading; the tone of Walk Softly And Carry A Big Lightsaber by Mercutio, is much more serious than she leads you to expect. One of the first good looks of what it means for Obi-wan to be so much younger than Qui-gon. [2]

Walk Softly and Carry a Big Lightsaber -- Mercutio -- Is a little more serious than the title would suggest.[3]

The thing I really like about this story is the title. How can anything with a title that good be bad? Fortunately, the story lives up to it. By it's very nature it has a fairly familiar plot but it's the way that Mercutio has handled it that makes it stand out. You can't help but get caught up in the characters as they try to do what is best, and it's only when the story changes POV that you realise why the characters are making seemingly bad choices. The Qui-Gon and Obi-Wan in this story are flawed, yet are still good Jedi. There's also an OC in this who is great - she does get to tell Qui-Gon off a lot, which is always good for a laugh, which is a nice counterpoint to the angst. The sex in it is R-rated, so it's not too graphic but it is definitely essential to the story - if you skipped it you would miss something. Which is all too rare in fan fiction. [4]

I love this story. I do. I adore it. I remember reading it when one part was posted to the M&A list each day by the author, and eagerly awaiting each new part (this was back in 1999). The whole story is available on the M&A archive, and on the author's home page. So, when it was published by AMC Press as one of their 'Best of the Net' series, I had to have it. This story is not an adventure story, but an emotional saga that takes place mostly at the Jedi Temple during down time between missions for Qui-Gon Jinn and his twenty-two year old padawan, Obi-Wan Kenobi. It explores what happens when a padawan falls in love with his master, and the master does not return those feelings. Don't worry - it has an appropriately happy ending, even one dealing with soul bonding! [...] If you love angst and hurt/comfort, and character-based fics, you'll love this.

I will admit I was dismayed when I first read the zine and found that AMC had tried to be clever. The publishers decided to use different fonts, combined with the use or disuse of italics, to indicate who was talking, and *how* they were doing it (through writing, speaking, or mind-speech). Now, that's not necessarily a bad thing. The 'Come to Your Senses' Sentinel zines have used such measures to good effect. The *problem* arose when the editors did not pay much attention to their use of fonts and italics and/or lack of italics, thereby mis-identifying speech. The result is that it is sometimes hard to determine who is speaking and *how* they are speaking (is this a private thought, something conveyed through mind-speech, something said out loud, something written down?). This type of error occurs about forty-five times in the zine. In a one hundred eighty-four page novel that averages to once every four pages.

Now, I love this story, and I've read 'Walk Softly' on the Net probably at least twenty times. I read this story often, so having it as a zine is helpful to me, even though I was at first rather upset that AMC did not give this story the treatment I feel it was due. [...] I bought this zine used, and got a bound copy of one of my favorite stories printed in readable 12 point type with a lovely cover by TACS. So, I'll just enjoy the story. Yeah, it would have been cool, when you think what a good editor could have done for this zine. And if wishes were horses beggars would ride. I've decided I'll just be grateful that I have a physical copy of the zine to read when away from the computer. [5]