Zinelist was a Yahoo mailing list devoted to the topic of creating, buying and selling and reviewing of fanzines. 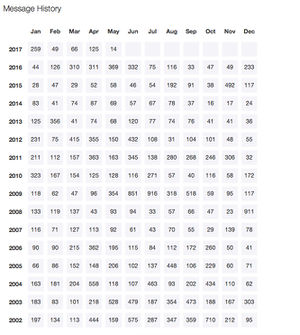 From the info page: "Zinelist is a list for the discussion of media zines as well as zine publishers, artists, tribbers, and readers. By media zines, we mean fanzines that contain fan written fiction stories centred around television shows/movies. Zines put out by members of the fannish community are also permitted (eg: S/H Cookbooks, Original Fiction Zines, etc.)"

The list was private, and cannot be quoted without permission here on Fanlore.

The list, at least in recent years, had a reputation of not being friendly to "newer" fandom fans or platforms such as Tumblr and Twitter.

Zinelist is a list for the discussion of media zines and zine publishers. E-Zine announcements are also welcome. Zine-related discourse between tribbers, artists, readers, and publishers welcome.

Fanzine posts must be labelled Gen, Slash, or Adult (aka Het).

No Flaming. Disagreement is fine. No personal attacks. I decide what constitutes a personal attack, but I also consider very carefully your peers' feelings, and if you are continually being complained about I will not tolerate it. By and whole, everyone who participates on Zinelist is tolerant of others, even when they don't agree. I want to see that continue.

Be careful to send any private replies to zine publishers/people selling zines (i.e. responding to posts for tribbers or to someone selling used zines).

OT discussions - while I do not mind a certain amount of OT, and will let some OT go, please do not post chain letters, virus warnings, petitions, reminders/notices of TV show/movie airings. Thanks for your understanding.

ADMIN posts are to be strictly adhered to. Any post from the listowner or co-admin which begins with 'ADMIN' is a note from the person(s) who make the rules and enforces the rules, no matter how arbitrary you may find them. Lists are not democracies. They are parties hosted by the owner, who gets to decide how the guests behave, and what the party game will be. They are not publicly owned.

When the list owner or co-admin feels the discussion has gotten out of hand, they will call a halt to said discussion. Their word is law. When a halt is called, no further discussion will be tolerated.

Posting personal emails or the discussion of private emails is not allowed on Zinelist. Do not forward or cut and paste any private emails or posts from other lists to Zinelist (even if zine related) unless the writer of the email has given permission to forward. Under NO circumstances are you allowed to send/forward/cut and paste any posts posted on Zinelist to anyone unless the post in question gives permission to forward.

If you are banned from Zinelist, you will not be allowed to resubscribe at any time. [1]

Zinelist is a list for the discussion of media zines as well as zine publishers, artists, tribbers, and readers. By media zines, we mean fanzines that contain fan written fiction stories centred around television shows/movies.

Advertisements/Discussion for 'zines' such as wrestling, alternative politics, music etc. are not what this list is intended for and your membership will be denied.

You must be over the age of eighteen to join this list.

1. Zinelist is a list for the discussion of Television and Movie inspired fiction fanzines and their publishers, as well as related fannish topics. List members must be at least eighteen years old. By joining, you are stating you are over eighteen years of age.

4. No Flaming. Disagreement is fine, personal attacks are not.

6. ADMIN posts are to be obeyed. Any questions on an ADMIN post must be OFF LIST and directed to a moderator.

7. When responding to a post, use names (so and so said) and BRIEF quotes of the previous post. SNIP the quoted post as much as possible.

8. Rule breakers will be moderated. If you continually need to be moderated, you may be removed from the list. You will not be able to resubscribe.

9. If listing zines / books for sale, you MUST accurately describe them. Copies of zines MUST be labeled as copies in your ad.

If you are not certain if your post is allowed on Zinelist, email me and ask. If you have any questions, or concerns, about these rules, please contact Bast privately at Zinelist-owner@yahoogroups.com

Anonymous asked: You don't even need nor deserve to be on Zinelist. You clearly think you know everything about fandom and know better than we do, and you constantly backhand all the hard work we do. Yes this is anon because I wouldn't be caught DEAD on Tumblr. But I've been watching since the last time you sounded off about long time fen. You have no respect for us. Leave us alone. You and your friends don't know nearly as much as you think you do about print zines, publishing, or anything else. [4]