Inception is a film written and directed by Christoper Nolan that combines elements of sci-fi, action-adventure, and character drama with a complex plot and engrossing visuals. It was released on 16 July, 2010, to critical acclaim and high box office returns.

Dominick "Dom" Cobb is an "extractor": a professional thief who steals information by infiltrating the subconscious of his targets using experimental military technology through a shared dream world. Saito offers him the chance to have his criminal history erased which prevents him from returning home to his children, as payment for the implantation of another person's idea into a target's subconscious.

The LiveJournal community Inception Anonymous Kink Meme was created on 15 July, 2010; this shows some prescience, because the film fandom took off like a rocket. In the first two months, the community logged over eighty thousand comments, many of which are prompts for fanfiction and stories written in response to those prompts. In addition, many stories and works of fanart have been created and posted outside of the kink community.

There is a lot of Inception-related activity on Tumblr -- photos, gifs, art, news, memes, recs, fic and more.[1] The Inception on Tumblr page has a non-exhaustive list of tumblr blogs devoted to Inception or a particular aspect of the fandom.

Aja offers some thoughts on the fandom and its exponential growth:

To me Inception is a die that's a dodecahedron instead of a cube. Every time I roll the die I come up with a completely different way of reading the film. And every single side the die lands on is emotionally satisfying to me. Every single side is so pleasing. Every single side tells me something awesome about human connections or the meta-layers of meaning at work in the film. Every side is just plain cool. 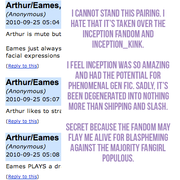 An anti-Arthur/Eames secret from Fandom Secrets.

Inception has inspired a lot of meta and discussion: