From Fanlore
(Redirected from K-pop)
Jump to: navigation, search

K-pop can refer to all South Korean pop music, but it is often used to talk about the idol industry in particular.

K-pop has an active RPF fandom. While there are many popular solo singers (Rain and Lee Hyori are just two examples), most fannish activity surrounds various boybands and girlgroups, sometimes called "Gasoos".

Idol agencies run programs in which they train hopefuls in singing, rap, dance, and foreign languages. The agencies then decide which trainees will debut and the membership, look, and musical genre of the group they will belong to. For example, many trainees have trained for hiphop groups but end up as rappers in a pop group.[1]

This studio-created, highly curated style is what defines idols along with their combination of music, dance, and visuals. South Korea has plenty of independent artists and groups who focus on music with no dance component, but they're outside of the idol industry.

Three of these agencies are particularly large and powerful and are referred to as The Big Three. They are: SM Entertainment, YG Entertainment and JYP Entertainment.

History of the Industry

Modern idol groups are often divided into a few "generations".[2]

2013-present - Kpop fully breaks into markets outside of Asia

Because of the language barrier and difficulty accessing K-Pop media in other countries, a large part of the English-Speaking K-Pop fandom involves fan labor translating and distributing K-Pop media for other fans’ access.

Fans who like to dance or sing will cover their favourite group’s songs (often, when waiting to buy concert tickets or to enter concerts, these coverists will entertain their fellow fans). It is common for big fans to go to the airport to greet and catch a glimpse of their idols, and common for many fans to film performances, sometimes focusing on their bias(fancams) or other times the whole performance, and post them on Youtube with a watermark. Organised fan groups will host events at coffeeshops to celebrate anniversaries or birthdays, giving out fan-made merchandise, collecting notes for their idols to post to them, and sometimes raising money to support causes or buy gifts for the members.

K-pop fans have their own vernacular. For example, fans will often refer to their favorite member from a particular idol group as their bias. They might also use the word gasoo/gasu, which means a singer/artist in Korean, and which can refer to any singer (including a kpop idol) in general, although it does have a connotation of a “serious” singer.

There is a K-Pop secrets blog, although it is inactive.

Although less critical now that even the smallest of MVs make their music available on YouTube and even Spotify, iTunes, and the like, Music rotation communities were once an important part of K-pop fandom. For a long time, albums by Korean artists could only be purchased online through stores such as YesAsia, and so popular Korean-language music was not widely accessible outside of speciality stores. Music rotation communities (normally located on Livejournal) are maintained by a single person or a small team of uploaders who share albums (and music videos) by K-pop artists.

Where to Find It

Out of the big three fanfic archives in English, FFN bans RPF, so K-pop fic is primarily found on AO3 and Wattpad. AsianFanfics is another major site. Mid-00s fic was often on Livejournal, while later fic was often on Tumblr and now Twitter.

Different sites have different types of fic, both in terms of which groups are popular and what types of shipping predominate.

Wattpad often has het readerfic for groups like BTS.

A lot of AFF fic is het, both with OC or reader/idol and male idol/female idol. M/M and F/F are also present. Some popular tags in 2021 are:

Overview: Between 2010 and 2021, K-pop has gone from being a nonentity to being one of the biggest tags on AO3. Much of this is BTS fic. As is the norm on AO3, much of the fic is m/m between group members, but in the 2020s, there is a rise in readerfic, which is often het.

K-Pop is popular overall on AO3, even outside the “Music and Bands” category. According to the YouTube video Largest Fandoms on AO3 Over Time[7] BTS became the first K-Pop fandom to crack the top 25 largest fandoms (fandoms with the most works) of any category on AO3, debuting at number 24 on February 4, 2017. BTS quickly rose through the ranks, reaching the number 10 slot on December 31 that same year. According to this video, BTS overtook One Direction as the 8th largest fandom by April 2018. They became the 5th largest fandom in May, 2020. They peaked as the 4th largest fandom starting in October 2020, before falling back to the 5th largest fandom behind Boku no Hero Academia a few months later on January 3rd, 2021. As of February, 2021, it still held that spot with almost 150,000 fics and no other K-Pop band had reached the top 25 by meeting the minimum of 41,806 fics. The overall “K-Pop” fandom was not tracked by this metric.

In addition to regular fanfic, there is a subgroup of K-Pop Podfic in the K-Pop fanfic community with its own dedicated fans.

In 2011, the K-Pop fanfiction history blog Time Vault divided the history of kpop fanfiction (in English?) into the following eras:[8]

These eras encapsulate the K-Pop fandom at the time, but do not document the more recent shifts in the fandom, for example the fact that, as of 2021, the K-Pop fandom has primarily moved to Tumblr and Twitter.

Fanwork events are popular within K-Ppop fandom, particularly for fanfiction on LiveJournal. While specific K-Pop groups have events individual to their fandom, there are general K-Pop fanwork events as well.

Other communities for general K-Pop on LiveJournal: 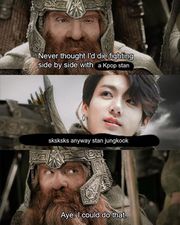 Fans in Korea are well-organized, and powerful: "There's a real sense of ownership and loyalty, and it ties these idols to their fans, up to a really weird degree. A lot of Korean boybands say "cutesy" things like "I'm married to my fans" or "my girlfriend is fanclub name]."" [11]

The kpop industry is one driven by the internet. So you can say that netizens and technology are what create news and drive the market. Netizens are also very opinionated and have no problem to voice their concerns and at some points shame the media. So the media is very wary of them, and must be as convincing as possible when publishing news, in regards to entertainment and artists. A lot of the time, netizens are the ones that make the news and are not easily fooled. [12]

Fan groups can act as powerful pressure groups when they feel it is in the interest of their idols. SM Entertainment, YG Entertainment, and JYP--three of Korea's major management agencies--have liaisons who work exclusively with fan clubs. Changing demographics may play a role in the increased power of fan clubs. Fan club activities include protecting stars' rights, charitable activities, and promotion. [13]

Popular artists also gain anti-fans: "An anti-fan is a person who ‘hates’ a particular celebrity or icon. Anti-fanclubs, also known as virtual communities of disregard, hate listings and diss-share sites are groupings of such anti-fans." [14]

Sasaengs in Korean fandom have also received an extremely negative reputation among English-speaking and Korean-speaking fandom alike. A sasaeng (or sasaeng fan) is a fan who actively stalks and harasses idols to the point of invading their privacy. [15]

Fandom in Other Languages

K-pop's global popularity means that it has not only fandom but fic and fanworks in many languages.

Despite being banned, K-pop RPF does show up on FFN. Most of it is in Indonesian, and it tends to be m/m between group members.

The large Russian archive Ficbook.net has 150,614 works tagged with BTS and 49,876 with EXO, among other groups. M/M appears to be popular.

There have been scandals over cultural appropriation, like idols sporting dreadlocks, and over blatant blackface on variety shows.[16]