B.A.P were a Korean Hip Hop boy band active between 2012 and 2019. The name was an acronym for Best Absolute Perfect. The group had six members: Youngguk, Himchan, Daehyun, Youngjae, Jongup and Zelo. It was a part of TS Entertainment together with other famous K-Pop groups like Secret and Sonamoo. It was also one of the groups that debuted in 2012 with the highest sales, ranking just behind EXO, VIXX and BTOB [1]

In 2014 the group filed a lawsuit against TS Entertainment. The process dragged on for almost two years before the two reached a settlement and B.A.P went back to promoting. [2]

The official name for B.A.Ps fanclub is BABY, an acronym for Baby Always Behind you[3], and its members are referred to as Babyz or BABYs. It was partly a play on B.A.P's debut concept, that they were aliens from Planet Mato sent to invade Earth [4], and how they considered their human fans to be small like babies.

During early promotions each member had a Matoki mascot, a kind of alien rabbit that worked as symbols for the group.[5] Their lightstick is in the shape of a green Matoki Head. [6]

On twitter, BABYs often use the #ForeverWithBAP tag when posting about B.A.P.

Because both B.A.P and EXO debuted in 2012 and were wildly successful, a rivalry developed between international fans of the groups. During the first year, the two were neck to neck in popularity. [7] Some even described it as a fan war Especially when it came to the coveted Rookie of the Year awards, both fandoms would urge their members to vote. B.A.P did win both the GAON and Melon ROTY awards [8]. However, the MAMA Rookie of the Year 2012 was neither Exo or B.A.P, despite their aggressive campaigning. Instead Busker Busker won the award [9], leaving both fandoms shocked and doubting how much of an impact voting actually made.

there is no resentment between EXO-Ls and BABYs .

It wasn't an ugly fanwar, it was a comic fanwar. that kind of fanwar with "gifs". Do you remember exotics vs. beliebers in EMA 2013?

anyway, MAMA screwed both exotics and babuies mocking their effort, days and nights of voting, so much passion invested. Once again, it was proven that "voting" have no importance in MAMA, they only use fans to create "buzz" for the show, but give the awards as they wish.
adda

As time progressed, EXO surpassed B.A.P in popularity. Fans of B.A.P would often blame the almost two year long hiatus, which made the group lose its momentum, and TS Entertainments lack of promotion for the group. [10] In 2017 B.A.P and EXO released songs on the same day, prompting more comparisons from fans. However, some EXO-L's meant that their rivalry was with BTS rather than with B.A.P at that point. [11]

There is a lot of speculation among BABYs and K-Pop fans that were around in 2012, what could have been if not for the troubles with TS Entertainment. [12] The question posed is usually if B.A.P could potentially have been one of the top tier groups, together with BTS and EXO.[13] Arguments put forward to support this alternate timeline are their musical versatility and how they bring up social issues in their songs[14], as well as the groups having a similar trajectory in terms of popularity pre-hiatus. [15]

Yes, I do think that B.A.P would be a top tier group. Whether as big as BTS or not, I'm not sure, but I do believe they would be massively more popular and respected than they are now. The parallels between BTS and B.A.P give hints as to how things may have gone, and having lived through the whole thing and been a fan of both groups since debut, I would be shocked if B.A.P had not taken off in a similar way to BTS following 1004. A lot of what appeals to ARMYs about BTS, the things cited as being highlights, are things that B.A.P also excels at. I feel like BTS has more of a universal appeal, being so heavily and consistently influenced by Western music and trends, but at the very least I think B.A.P would be a major player in the kpop game had things gone better.
brigidandir

Due to the similarities of their concepts, it's also believed that during the hiatus B.A.P lost a lot of fans to BTS. Some even go as far as to attribute the rise of BTS to the fall of B.A.P, which is (mildly put) a controversial opinion.[16] However, while some B.A.P fans surely turned into BTS fans, there were a number of similar groups active around the same time competing for attention. Many also point out that while B.A.P could surely have gained some popularity, the kind of fame BTS managed to amass is truly unparallelled by any other K-Pop group, and there is little to suggest B.A.P would have been able to match them.

bts weren't the only ones that gained fans. Bap fans split to got7, exo, and ikon. People forget how got7 was everyone's favorite group back then before they started hating on the group. It seems unfair how some people will say bts only got popular because bap went on a hiatus but won't say the same about the other groups who also gained those international fans.
DashingDarling01

It's another way kpop fans try to rewrite history honestly. BAP was never going to be in BTS's shoes, whether the lawsuit happened or not. Bang Yongguk is so talented and it's a shame the group ended up like it did but BTS really had everything they needed to end up where they are now and some other groups ( BAP, topp dogg) just didn't
sappydumpy

Due to their closeness, Daehyun and Youngjae quickly became the most popular ship in the fandom. They had a playful dynamic during promotions, where Daehyun was cheeky and teasing with Youngjae.

As the two eldest in the group, Youngguk and Himchan would sometimes fall into a kind of parental dynamic. As the group leader, Yongguk would often be the more responsible and mature one, while Himchan could be more dramatic.

Some tropes of B.A.P fanfiction were shared with the usual K-Pop fandom, while others were more unique for the group. 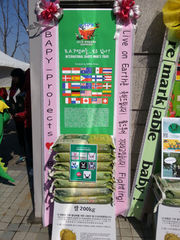 Charity and Other Projects

During the early years of B.A.P promoting, it was very uncommon for english subs to be made available for K-Pop videos. Because of this, there was a community of fans translating and uploading shows with subtitles.