Block B is a South Korean Hip Hop boy band. They were formed in 2011 and as of 2018 the members are pursuing solo projects, although the group has not disbanded.

The name of the Block B fandom is BBC, which stands for Block B club. To distinguish between Korean fans and Internation fans, sometimes the names KBBC and IBBC are used. Additonally, the fans are sometime's referred to as Bees, and both Zico and Taeil have bee tattoos. [1] The symbol for the fanclub is a honeybee [2], and the official lightstick has black and yellow stripes.

The members are aware of the fans shipping them, and have talked about how they've read some of the fanfiction. As of Februrary 2021 there are ~1000 fanworks on Ao3 for Block B. However, during the group's peak popularity most works were not posted on Ao3, but rather scattered over the web on places like tumblr or livejournal.

Popular ships in the fandom include:

Zico and Park Kyung are close friends from before they debuted in the group together, and during promotions they would do a lot of fanservice with each other. From skinship to feeding each other and calling each other cute names. This is probably the reason why it became the most popular pairing, combined with the fact that Zico has always been the most popular member due to his success with his solo projects.

In a 2016 episode of SNL Korea, Block B were part of a skit called My Boyfriend is Block B. The skit is about a female fan, writing self-insertion fan fiction about herself and P.O. It also features a scene where Park Kyung confesses his love for Zico, and the two of them share an onscreen kiss. As a result, the show received backlash from viewers for featuring "a storyline supporting homosexuality" and was met with a saction from the Korean Communications Standards Commission. [3]

Taeil is the oldest member of the group, and also the shortest, while P.O is the group maknae, and happens to be the tallest. P.O has a very happy and playful personality, and often jokes about how cute he finds Taeil. Meanwhile, Taeil is heavily tattood and quite serious. The two have a dynamic the fandom appreciates a lot. 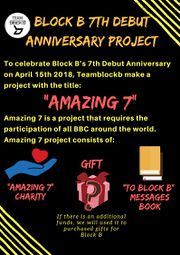 The BBC fandom has organized a lot of projects to promote the group and bring fans closer. Usually projects are organized by fanpages rather than by the official fanclub. This means that there might be numerous projects to celebrate the same event. Ex. for a member's birthday there will both be a number of Block B fanpages doing something to celebrate, but pages devoted solely to that member might do something as well.

Another common way to celebrate groups is to buy public ads for them.

Block B and its members have had a number of controversies. Not all of them have been large, but as they amassed fans became doubtful if the group's reputation would survive. [10]

In 2012, during an interview in Thailand, when asked about the recent flood the members answered jokingly that they would help with the money they had in their pocket, which was ~700 won ($6).[11] Their careless attitudes upset people, both in Thailand and internationally. To show their remorse, they recorded a video of themselves apologizing, which also showed that Zico shaved his head to show respect. Fans have expressed mixed feelings of the events, but many agree that the backlash was not in proportion to the behaviour, and that the matter was made worse by mistranslations between Korean and Thai. [12]

One of the members most affected by the backlash was P.O, who was hospitalized after fainting when he reportedly learned about a petition that the members should apologize by commiting suicide. However, no such petition was able to be located. [13]

In 2012 U-Kwon chose to go public with his relationship with model Jun Sun-Hye.[14] After the announcement, some fans were upset by what they perceived was a change in attitude towards BBC. They felt like U-Kwon was posting too much about his girlfriend on social media, and wasn't being loving enough during fanmeets. [15] It didn't help that his girlfriend was seen with a bracelet identical to one U-Kwon had been gifted by a fan, leading to fans assuming he had given his girlfriend the gift intended for him.

I've been a fan since 'Nanrina' and the biggest reason I've been falling out of the fanbase is because of U-Kwon. If you compare his Twitter or Instagram from early debut to now, it's a mess. He used to be so good to fans but now he ignores them and it was only until recently when they gained a lot more fans that he's been pretending to do some fanservice.
K-Netizen

Others were happy that U-Kwon was honest about his dating life, even if they argued that it should not get in the way of his job as an idol by making him not act unfriendly towards fans.

I've been a BBC ever since they first debuted with Freeze. I've been through scandals after scandals and stayed by them. When ukwon announced his relationship, I was so happy! This is the group I know I stan right. Being open with the fans and promote honestly. I really respect him for doing that but kwon ah.. this is getting ridiculous. This is not the matter of you have a girlfriend or not. We don't care and you know that! Just have some basic manners. Ugh
isabellmiao

Originally, Block B were under the entertainment label Stardom (together with groups like ToppDogg and EvoL). However, in 2013 the members of Block B filed a lawsuit against the company claiming that they had not been paid since their debut in 2011. They also said that the former CEO of the company, Mr Lee, had stolen money was meant to fund the group's activities. Not long after the case went to court, Mr Lee was found dead, having commited suicide. [16] The court did not rule in Block B's favour, but they worked to have their contracts annulled [17] and went on to start their own label, Seven Seasons.

Because of this, Block B did not promote or release music for almost a year. In an industry where popular groups can release a new track every 3rd month, this was a very long time for the fans to wait in uncertainty. When they did finally release a song, it was Be The Light. In the music video, one of the members is beaten up while he thinks about a girl waiting for him. Fans interpreted this as Block B making a song about their fans, that have remained by their side through controversies. [18].

In 2014, Zico released a solo song called Tough Cookie. In the music video, he is wearing a jacket that features a patch of the confederate flag. This upset a lot of international fans, who found it culturally insensitive. The lyrics also had a number of derogatory terms, that made listeners upset. [19]

Once again, fans were divided. Some pointed out that the jacket in question was designed by Kanye West, others felt like that made no difference. Zico's label eventually apologized for the derogatory terms used in the song. [20]

Zico apologised for the Tough Cookie MV slur. I think it's also worth noting that the confederate flag jacket was the Yeezus tour jacket by Kanye West. You wouldn't assume something is racist if it was designed by a black person.
redditor mapleleafmaggie

In 2019, Jung Joon Young was investigated for having filmed and shared sexual footage of at least ten different women without their consent. It had been done using a mobile phone. Back in 2016, Zico had made jokes while appearing on the show Radio Star together with JJY that the other had a "Golden Phone". Because of the nature of his comments, fans suspected that Zico had known about the illegal footage and even watched it. When the rumours surfaced, Zico made a statement that he had been referring to another phone and that he had no knowledge about JJY's crimes. [21]

Some fans found the whole thing too unpleasant to keep supporting Block B and Zico, while others chose to believe Zico's side of the story.

It’s good you made this post. I’m sick of the same people who cry over the deaths of artists, unjustly crucifying Zico over something that has no evidence to it. This is bullying, it needs to stop. You can’t continue to attack people over allegations, which in this case there are no allegations, it’s clear to see what happened and it was clear when the police, lawyers and journalists didn’t release his name, that he had nothing to do with this.
redditor real_highlight_reel

In September 2019, an anonymous netizen posted that they were a former classmate of Park Kyung. They went on to write about how Park Kyung would bully and harrass other students, stealing their money and using violence against them. [22] Park Kyung admitted and apologized for his previous actions in an instagram post [23], but many fans no longer felt comfortable supporting him. Others felt like it was unfair to punish Park Kyung so fiercely for actions when he was a child, especially when he was showing himself remorseful.


I don’t understand why everyone in this world is acting like they have never made mistakes. It may be a small mistake or big mistake but at the end of the day, it’s still a mistake. You shouldn’t be showing disgust or have any rights of judging a person still. If you act like that then you’re no different from all the others. We should instead feel proud when one acknowledges their mistakes so they learn from it and at the same time, we learn too. Not everyone is perfect. Just because one is a celebrity or a public figure, that does not mean they are not human. I’m honestly not a fan of Park Kyung or Block B. I’m just a KPOP follower and I’m sick and tired of reading comments from people who seem to know it all.


Adding to what the people before me have said, I would like to remind everyone that bullying is not just a mistake, it is a CRIME. And he didn't just do it by mistake, he knew exactly what he was doing. If we excuse all actions as mistakes, then why do we have a legal system in place. If a murder is not excused as a mistake then why should bullying be? Just because he claims to have been bullied in elementary school doesn't give him a right to bully others. Sure no one is perfect but people need to be held accountable for their actions - that is what makes them learn from their mistakes. If we look at the situation from an objective standard, we see a middle schooler has bullied other middle schoolers. If it was any other ordinary middle schooler we would have held them accountable for their actions - that is why there are laws in place. Just because he works in the entertainment industry he cannot get away with anything. Also, that apology is one of the worst I have ever seen. He is literally trying to excuse his actions by making people sympathize with him. It seems as if he is sorry that the situation came to light rather than being sorry for his actions. This situation reminds me of the recent AOA incident. If Jimin was held accountable for her actions, why shouldn't he be?

More helpful links can be found on blockb.com.