A Life Without Limits (Beauty and the Beast anthology zine)

See other articles with a similar title: A Life Without Limits. 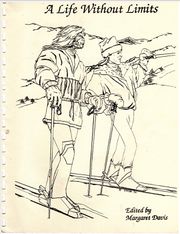 A Life Without Limits is a gen Beauty and the Beast AU anthology with three issues. Its focus is unusual: fantasy stories all in the form of Catherine and Vincent's shared dreams.

Shield of the Lion is a continuation of some of these stories.

A Life Without Limits 1 was published in July 1990 and contains 214 pages.

It contains art by Phyllis Berwick, Dragon, Barb Gipson, Judy Ley, Rita Terrell, Chris Schacter, K. Jackson, Kerin, Star, Holly Riedel, and Shirley Leonard. The artists are not identified on the title page, so you need to be able to read the signature on each illo, or guess as to who is responsible for what. 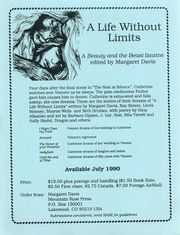 a flyer for issue #1
From a flyer:

Four days after the final scene in "The Rest is Silence", Catherine watches over Vincent as he sleeps. The pain medication Father gave him causes him to dream. Catherine is exhausted and falls asleep; she also dreams. These are the stories of their dreams of "A Life Without Limits"...

In "A Fair and Perfect Knight," Vincent told Catherine "You deserve a life without limits." Who should know better than he whose life has been bound and structured by limits.

A Life Without Limits takes place four days after "The Rest is Silence." Vincent is injured but will recover and Catherine, who has watched at his bedside for three days and nights, is exhausted. They sleep and dream. When we dream there are no boundaries or edges, this 'zine is the story of those dreams.

The cover art is taken from the story "The Honour of Your Presence," which due to space constraints, has been postponed until "A Life Without Limits II." Vincent and Catherine are in Aspen, it's their honeymoon, need I say more... ?

Stories centered on the premise that, after the Trilogy, V/C fall asleep in his chamber and have a series of dreams. Lions figure prominently in two; one is a Regency romance with manor houses; one is Egyptian, with C presented to the new pharaoh, lion-headed V. You get the idea. Stories are all competently done and quite uniform in quality. Art by Phyllis Berwick (very nice, here), Dragon, Barb Gipson, Judy Ley, Rita Terrell, many others.[1]

A Life Without Limits 2 was published in June 1991 and contains 184 pages. 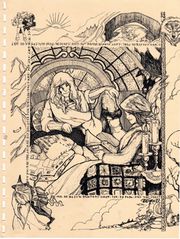 From the Letter from the Editor:

It's a beautiful spring morning—birds chirping and sunshine pouring through the skylights—a time of new beginnings, a time of hope. We've heard little snippets of news about the movie recently and it is my wish that the news will draw us together again. The fragmentation of fandom in this group and that group vigorously defending their positions is regretful and disheartening. Now is the time to join hands and turn our faces forward to the future—a united future.

South of Oz is on the horizon and I'm so excited about seeing Ron Perlman, Roy Dotrice, Jay Acovone, et al, that I find It difficult to refrain from jumping up and down and screaming "Yes!"

For those who have not read the first volume of LWOL, let me explain the timeline. After Vincent fled to the catacombs (The Rest Is Silence), Catherine prevented him from further injuring himself. Safely back In his chamber. Father treats his wounds and gives him medication which makes him sleep much of the time; and when he sleeps, he dreams. Catherine watches over him for three days and nights and finally, exhausted, falls asleep and also dreams. The LWOL series tells the stories of those dreams. In volume two we've moved ahead a few days as Vincent begins to heal.

I've been asked if LWOL 3 Is In the works. Well, sorta - there are stories that still haven't been told such as the Vincent goes to the cattle drive story and the story of Vincent and Catherine on their fiftieth anniversary. So, if there is enough interest, we'll do this one more time, which is a big hint for you guys to write some LOC's!

This time, the entertaining “ifs” of dreams take V/C to Regency England, the Arabian desert, Tolkien's Middle Earth, and a bowling alley Below, among other varied locales. Some stories follow up others in the first volume-notably, a return to “Tunnelwood,” Hooson's Regency romance, and a sequel to Kay Simon's fine “Ladyfaire,” “Heirs to the Keep.” Generally good editing, sensitive poetry, and fine artwork demonstrate that Mountain Rose Press is continuing its tradition of craftsmanship. Rita Terrell's cover is a knockout.[2] 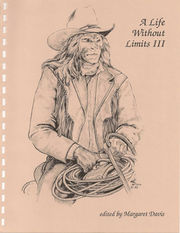 A Life Without Limits 3 was published in July 1993 and contains 149 pages.

Announced conclusion of this series. Among this issue's offerings:

Father and Mary, suffering identical amnesias, become bikers of the Black Dragon motorcycle gang (Roxanne Shearer Koogler's “Born to be Wild”); cowpoke V escorts tourists (including C) on a cattle drive (“Tunnel on the Range” by Margaret Davis and Susan Regan); Gandalf's apprentice V and his betrothed, Lady C, have adventures after leaving the safety of Rivendell, from Tolkien's The Lord of the Rings (“Beyond the Gardens of Rivendell” by Margaret Davis); V/C visit Disneyland (“Fantasyland” by Linda Mooney). An anecdote by Randie Pressman recounts V/C's attendance at a grandchild's Naming Ceremony.

There are also more substantial stories and it's these that raise the zine above the average. “Legacy of the Lion” by Kay Simon is a new installment of the Ladyfaire stories of Norman England-non-fantasy, even starkly realistic at times, with excellent situations and background material and interesting characters, beautifully written and paced. Here, Lady C tries to enlist the help of V's estranged father to secure troops to help V overcome a castle's defenses. In Lucy Green's “House of Lions,” C, virgin princess of ancient Greece, isn't offered up after all to make the gods yield rain: instead, a gods' messenger, winged V, arrives to prevent the sacrifice...and fall in love with her and found a dynasty. And in E. Wyllis' fine “A Walking Shadow,” C tries to continue after V dies, troubled by terrible dreams that make her feel he isn't at rest at all....