For the book by Neil Gaiman, see Norse Mythology (book).

Norse mythology refers to the myths of Scandinavia, and is also known as Scandinavian myth or Icelandic myth. They tell of the gods of the Aesir & Vanir and their conflict with each other and with the Jotunn (sometimes translated as "giants"), plus a cast of heroes, shield-maidens, crones, dwarves[1], elves, dragons, wolves, serpents, talking birds & a great big tree, and feature shape-shifting, gender swapping, crossdressing & male pregnancy, and lots of fighting, feasting, drinking & sex. Several characters in Norse mythology are in possession of or have access to magical weapons or mythological objects, sometimes even both.

Most of the texts were written down in Iceland in the 13th century, after the area had converted to Christianity, but often originate in much earlier oral tradition. The main texts are the Prose Edda & Ynglinga saga by Snorri Sturluson, the anonymous Poetic Edda, and skaldic poetry by various poets. These are supplemented by numerous Sagas of Icelanders. Despite the lack of a single source text, it is sometimes considered a rarelit fandom.

Norse mythology was a small fandom under the rarelit umbrella. It has increased significantly in popularity with the release of Thor (2011) & subsequent Avengersverse films; the first crossover with Thor appeared in a few months before the film's premiere.[2] As of 2013 it remained small enough to qualify for Yuletide, where it's been a staple since 2005.

The most popular character in fanworks is the trickster Loki from the Jotunn, lord of fire & mischief. His popularity pre-dates the Marvel films but the fan acclaim for Hiddleston's version hasn't done it any harm, even though the characters are little alike. Other major characters include the one-eyed Odin the Allfather & his son Thor of the famous hammer, Freyja (the only Vanir to get much attention), Loki's wife Sigyn & his children with the Jotunn Angrboða, especially Hel & Fenrir, Odin's wife Frigg and their son Baldr, and Thor's wife Sif.[3] The Valkyries, the Norns & Yggdrasil also turn up in canon works & crossovers. Most pairings include Loki, who is usually portrayed as omnisexual.[4] Odin/Loki was relatively common before the Marvel films; subsequently there's been a rise in both Loki/Sigyn and Loki/Thor. The rare examples of femslash often involve a female-Loki.

Lots of works play up the gender-bending and just plain weird aspects of the original myths, while many darkfics focus on Ragnarok, the Norse apocalypse. Before the Marvel films, the majority of works were set in the canon universe, although some works used a modern setting, generally with the conceit that gods/Jotunn are immortal (as opposed to a modern AU). Valhalla & Hel, the Norse versions of the afterlife, sometimes appear in crossovers with other fandoms.

Many fanworks in American Gods, Eight Days of Luke and Wagner's Ring Cycle fall within the general mythverse, while some Marvel film stories draw on elements of the myth that don't appear in the films. Crossovers with Supernatural are also relatively common, as are those with other myths/religions including Greek myth and the Bible. 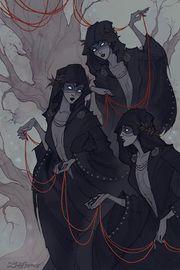 As of January 29, 2020, at least two Incorrect Quotes-blogs based solely on characters and events from Norse mythology are active on tumblr: