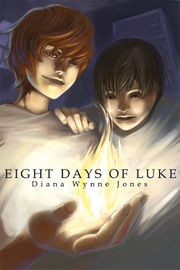 Eight Days of Luke is a children's/YA fantasy novel by Diana Wynne Jones that was first published in 1975. Its protagonist is an English schoolboy who becomes inadvertently involved with characters from Norse Mythology, particularly the trickster Loki.

David Allard is an neglected orphan whose unloving relatives unburden themselves of responsibility by sending him off to boarding school and holiday camps. Frustrated at the discovery that this year they have forgotten to make any summer arrangements so that he will therefore have to spend the holidays with them, he makes up an imaginary curse upon them. To his astonishment, it crumbles away the garden wall to release a red-haired boy—seemingly much the same age as he is—who calls himself "Luke". Over the next few days it becomes clear that Luke is being pursued by a group of mysterious strangers who accuse him of complicity in a mysterious theft. Luke denies any guilt in the matter; and David assists in clearing him and recovering the missing object. Along the way, David slowly puts together his new friend's obscure references and curious power over fire with the names and characteristics of the pursuers, and realizes that he is dealing with the Norse gods in mortal disguise.

As the story progresses, David also realizes that Astrid Price, the young wife of his Cousin Ronald, is just as unhappy as he is. At the end, it turns out that his other relatives have been stealing his inheritance, and he and Astrid move out to a place of their own.

Eight Days of Luke is a rarelit fandom.