From Fanlore
< Loki
Jump to navigation Jump to search 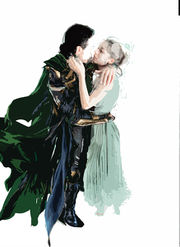 Loki/Sigyn is a canon het pairing in Norse mythology and Marvel Comics. Depending on the source, the married couple has two or three sons: Narfi, and/or Nari, and Váli.

Fans of this paring ship them together because they are married in Norse Mythology and believe both Sigyn and Loki compliment each other. In Mythology, Sigyn chooses to stay by her husband's side for eternity, holding a bowl above his head to shield him from the snake's acid and hold off Ragnarok from happening. It's this action right here that speaks to fans with this pairing because of Sigyn's undying loyalty to her husband. Even though much on their relationship in the Mythologies is scarce, fans typically portray their relationship together as loving with Sigyn knowing Loki's flaws, but accepting him anyway while Loki is a loving husband.

As for the Marvel Comics, most of the fans tend to ignore it since they feel the comic writers did a lousy job portraying their relationship, much less how they wrote the characters personalities as well. Most fans tend to make fan fictions, fanart and headcanons to correct this error. The same goes for the MCU as well. Sigyn hasn't appeared in the MCU yet, but it doesn't stop fans from creating works for this pairing.