From Fanlore
(Redirected from Greerwatson)
Jump to navigation Jump to search

Greer Watson has been writing unpublished fan fiction since the '80s. However, she did not become involved in organized fandom until 2004, when she first went online. Although she has broader interests as a lurker/reader, she has only two main fandoms, Forever Knight (largely the mailing list community, but also LiveJournal) and Mary Renault (specifically, the maryrenaultfics LiveJournal community). However, for Yuletide, she has written short stories in several other fandoms.

Greer is a principal contributor to and editor of the Forever Knight Wiki, and collected the sites in the Forever Knight Website Archive. She has also given academic papers on fandom and/or her fan interests at the International Conference on the Fantastic in the Arts.

Greer's first published fan fiction was a virtual season for Forever Knight, FK4. This was written between 1996 and 2004 and "ran" with consecutively posted episodes on her website from 20 October 2004 to 8 May 2005. In all, twenty-two episodes written in a modified script format comprise the full fourth season. Each episode includes notes and TV Guide-style blurbs, as well as other ancillary material.

In 2006-7, she provided some assistance to Nancy Taylor in updating the Forever Knight Episode Archives, a major collection of screen captures.

In 2008, she assisted Susan M. Garrett in constructing a Forever Knight section on Fan History Wiki, and then followed Susan when she moved her work to the Forever Knight Wiki instead. Since then, Greer has been a principal contributor, being made an admin in 2010.

In 2009, she collected over fifty websites (mostly from GeoCities, which was about to be closed) and created the Forever Knight Website Archive, which is hosted by Stephanie Kellerman.

In 2012, Greer began work on a large series of icons for the Forever Knight factions, posting them severally to her LJ blog from 12 February to 22 October, before putting the collection (of over 130 designs) on her website. See: Forever Knight Faction Icons

A collection of letters and e-mails between Greer, Margaret L. Carter, and Jacqueline Lichtenberg (from 17 June 2005 to 3 July 2006) appeared in Companion in Zeor 23 under the title "A Discussion of the Historical Evolution of Population in the world of Sime~Gen".[18] Further statistical analysis based on this correspondence was the foundation for a conference paper, "Predator/Prey Ratios: Lichtenberg and Lorrah's Sime~Gen Series and the Plausibility of Vampires", given at the ICFA in March 2007.

Greer joined maryrenaultfics in 2007 shortly before the second chapter-by-chapter discussion of The Charioteer, in which she took part. She then became an active contributor to many of the book discussions, as well as writing fan fiction. Her stories have either been based on The Charioteer or else set in the ITOWverse.

In 2008, Greer was one of a small group of heavy contributors (also including trueriver, my_cnnr, queen_ypolita and fawatson) who provided a series of "invitation" ficlets to characters in Renault's stories in order to set the stage for the community's fifth anniversary celebrations. With her sister, fawatson, she has since co-written two holiday series of ITOWverse stories, in 2009 (Christmas) and 2010 (Halloween/Guy Fawkes Day/American Thanksgiving).

For Christmas 2010, Greer created The Collected ITOWverse,[21] a combined index/collection of all ITOWverse stories. This was a Christmas present to the community.

Greer remained a member of maryrenaultfics until January 2015, when the moderators put the community on hiatus. She is currently a member of the RenaultX Dreamwidth community.

In theWorldbuilding Exchange, Trick or Treat, and other gift exchanges, Greer has written several stories based on the CW series, The Flash and DC's Legends of Tomorrow.

Both written and illustrated.

Greer Watson has given the following conference papers related to her fan interests and/or fandom in general: 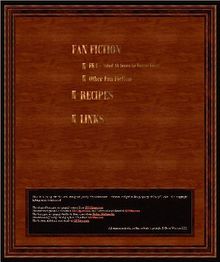 Greer has a personal website, which contains most of her fan fiction, as well as a section for recipes. The website was started in 2004 to showcase her virtual season, FK4. In order to create a site that looked the way she wanted, Greer learned HTML (studying from how-to books) and acquired/made a large collection of graphics, especially background tiles.

Most of the pages of the site share a common design: a fancy background graphic, a bold title, and a large central panel containing the text. This panel is surrounded by an elaborate frame consisting of numerous inter-nested tables, each of which has a narrow padding that reveals a different background selected to tone/contrast with the background graphic. At the bottom of every page is a block of footnotes crediting the sources of the graphics. Some pages also include clipart; and many of the Forever Knight-related pages include screen captures, mostly taken from Nancy Taylor's Knight Watchman website.

Originally, the site consisted entirely of FK4 with its ancillary introduction and notes pages. In 2006, a new index page was created in order to provide supraordinate organization when a small recipe section was added. Greer's first fan stories based on The Charioteer were added in 2007, along with links to her Sime~Gen material. In 2010, this "Other Fan Fiction" section was greatly expanded, first with the addition of her new FK and MR fiction, and then the collation of The Collected ITOWverse, which officially debuted 25 December 2010.

Webspace for the site was originally (at least nominally) provided by Greer's ISP, which actually had a deal with Yahoo! to provide its customers with GeoCities sites. As a result, when GeoCities was closed, Greer's site had to be moved. It is currently located within the Forever Knight Website Archive.