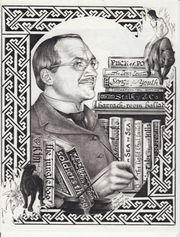 Rudyard Kipling (30/12/1865 – 18/01/1936) was an English poet, short-story writer, and novelist. He is famous for his tales and poems of British soldiers in India, but wrote in many other genres including horror, romance, sea stories, fantasy and science fiction. He was extremely popular in the late 19th and early 20th C; but his works have since fallen out of fashion due to their association with the British Empire and imperialism, although he was often critical of unthinking Jingoism. His tales for children are on the shelves of most public libraries and have been read eagerly by generations of school age children, with whom he remains popular. Kipling received the Nobel Prize for Literature in 1907.

Kipling’s fictional works for adults include The Light that Failed, Plain Tales from the Hills, The Phantom Rickshaw and Other Eerie Tales, and The Day’s Work

His books for children include The Jungle Book, Just So Stories, Puck of Pook’s Hill, Rewards and Faries, Captain’s Courageous, Kim, and Stalky & Co.. The latter two could also be said to be aimed at an adult audience due to the themes within them.

His poetry includes "Mandalay", "The White Man’s Burden", "Gunga Din" and "If".

One of his short stories – “The Man Who Would Be King” – was turned into a film, as was Kim. The Jungle Book is an animated Disney film and is one way successive generations of children have initially accessed Kipling's works.

Recurring themes within Kipling’s work include honour and morality, friendship and loyalty, and doing one’s duty. Much of his work is noted for witty banter between characters, humour, and wry commentary on race relations (which is why Kipling's works for adults are now viewed as rooted in imperial tradition and are unfashionable).

There does not appear to be any organised online fanfic activity for Kipling’s works. However, there is a yahoogroup "animejunglebook"[1] This group was founded in 2000 and has 82 members based on its members' love of the Disney version of this novel. It is not the most active group, but members do still post occasionally.

A search of livejournal done by fawatson on 8th January 2012 did not reveal any English-language communities focussing on Kipling's works, but did reveal an individual journal for viceroy_india titled "Plain Tales from the Hills" [2] This suggests there is a (currently disorganised and untapped) interest in Kipling.

However, a search of livejournal done on 8th January 2012 suggests there is a Russian-language community focussing on Kipling's works at ru_kipling titled "Стихи и проза Редьярда Киплинга's Journal" [3] The most recent entry to that community was made in November 2007, which suggests it is now inactive. Quick perusal of entries suggest the community was focussing on the translation of Kipling's poetry from English to Russian.

As rarelit, Kipling's books are often requested in Yuletide and similar gift exchanges, or those focusing on children's fiction, such as Exchange at Fic Corner.

A scattering of fanfiction can be found related to Kipling’s children’s novels. Some authors write their stories as pastiche, taking pains to imitate Kipling's distinctive writing style.