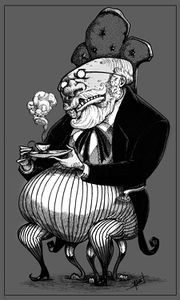 Goryesque, a character inspired by the art of Edward Gorey, by pupukachoo (2011)

A pastiche is a work of art that imitates the style or character of the work of another artist. Unlike parody, pastiche celebrates, rather than mocks, the work it imitates.

The term is used in the Sherlock Holmes fandom to describe both fanfiction and published fiction featuring Holmesian characters, especially fanwork that imitates the style of Arthur Conan Doyle's stories. It's also sometimes used in Tolkien, Austen, H.P. Lovecraft, Robert E. Howard's Conan the Barbarian, and some other literary fandoms for works that attempt to imitate the author's style.

Outside of lit fandom, fans are more likely to use pastiche to describe only professional writing, if they use it at all. See also Wikipedia's article.

It has also been used for the type of fusion where characters from one universe enact the story from another universe, particularly before the growth in popularity of the term "fusion".[1]