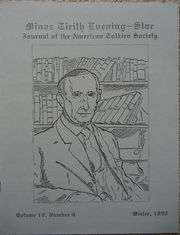 Our Founder, portrait of Tolkien on the cover of an issue of Minas Tirith Evening Star

J.R.R. Tolkien (1892–1973) was the author of The Hobbit, The Lord of the Rings and The Silmarillion, as well as various other works set in Middle-earth and the broader Arda.

Many Tolkien fans are deeply interested in his life, and especially his experiences in the First World War, his friendship with C.S. Lewis and membership of The Inklings, and the extent to which his writings might be autobiographical. Fans are also often interested in his works outside the Ardaverse.

Tolkien appears in occasional fanfiction, which is usually gen. One trope is that he was told the history of Middle-earth by an Elf (often Maglor), often during WW1. Some fans use Tolkien's own conceit that his fantasy works are actually translations.