Loki is a Marvel Comics supervillain based on the Norse deity of the same name. In the Marvel Cinematic Universe (MCU), Loki is played by Tom Hiddleston.

Loki first appeared in Journey into Mystery #85 (October 1962). In the older Thor comics Loki is often an antagonist, and sometimes still is, but his role changes depending on the run, and in some of the more modern comics he can be portrayed more as a morally gray character. In the comics Loki is married to Sigyn.

When Thor's coronation gets interrupted by Jotun (Frost Giants), Thor and his brother Loki (along with Thor's friends) defy orders and a longstanding peace treaty to go to Jotunheim, the planet of the Jotun, where they start a fight that ignites the war anew. As punishment, Thor is deprived of his powers and banished to Midgard/Earth, not to return until he proves himself worthy again.

Loki, meanwhile, finds out that he is not the biological son of their father Odin, but a Jotun foundling, son of Jotun King Laufey -- a member of the race he grew up believing to be monsters. When his outrage at this revelation so distresses Odin that Odin falls into the Odinsleep, Loki is handed the throne of Asgard.

In an increasingly frantic attempt to deal with the war, prove his worth to his father, and decry any link between himself and the Frost Giants (especially since he's the one who let a few into Asgard, specifically to disrupt Thor's coronation and prove that Thor was too hotheaded to be ready for the throne), Loki lures Laufey into a trap and kills him, sends a powerful monster to Midgard to deal with his brother and Thor's friends, and attempts to use the power of the Bifrost bridge to destroy Jotunheim entirely. However, Thor survives the attack, regains his powers and his unstoppable hammer Mjolnir, and returns in time to stop Loki. In the end, disheartened to the point of suicide, Loki lets himself fall into the void between worlds.

In The Avengers, Loki tries to conquer Earth at the behest of Thanos. He controls Hawkeye and some others by using a magical scepter, and uses the Tesseract to open a portal for the Chitauri army. Though the plan ultimately fails, the threat prompts the creation of the titular Avengers, a group of Earth's mightiest heroes (and Thor). Beaten down and captured, Loki is taken away to Asgard for sentencing.

Partly because Loki refuses to show remorse for his actions, Odin sentences him to lifetime imprisonment, without visitors, though his mother (Frigga) gets around this restriction, contacting him via magic. A year later, when Asgard falls under attack in Thor: The Dark World, Frigga is killed, and Thor covertly releases Loki to help him save Jane (Thor's girlfriend) and get vengeance against Malekith, the leader of the attack. During the final battle, Loki repeatedly defends Jane, then gets mortally wounded while saving Thor's life, and appears to die. However, at the end of the film, it's revealed that he is still alive, masquerading as Odin.

In Thor: Ragnarok, Thor uncovers Loki's deception, and they seek out Odin on Earth; however, by this point, Odin has greatly weakened, and dies (turning into sparkling light) shortly after they find him. His death releases his firstborn, Hela, the Goddess of Death, who is determined to conquer the Nine Realms. When she effortlessly stops Mjolnir and shatters it, Loki calls for the Bifrost so they can flee, but this merely gets Hela to Asgard all the faster, while Loki and Thor are thrown to the slave planet Sakaar.

Certain that Asgard is doomed, Loki decides to stay on Sakaar, and quickly gains the favor of Sakaar's eccentric leader, the Grandmaster. Thor refuses to write off his responsibilities so easily, and forms an alliance with the Hulk and Valkyrie in an effort to flee the planet and get back to Asgard. Loki briefly joins them, then briefly betrays them, but ultimately does return to Asgard to fight at his brother's side in what seems to be a hopeless battle. In the end, it is Loki who takes the crucial action to spark Ragnarok, destroying Hela but also Asgard itself, while the refugees and heroes escape on the Grandmaster's ship The Statesman.

However, they've barely managed to catch their breath before Thanos appears and attacks them, killing half the refugees as well as Loki, thus kicking off the Infinity War.

While Loki was a recurring character in Marvel comics from 1962, he didn't become a major figure in fandom until the release of the movie Thor in 2011. Thanks to his tragic origin story and Tom Hiddleston's sympathetic portrayal, he became the fan favorite. In The Avengers (2012), Loki was the main villain, and his popularity in media fandom skyrocketed.

While Loki is a villain in the movie canon and most comics canon, many fans see him as symnpathetic, the woobie, or even the hero of his own story. A number of fanworks portray Loki as working with or eventually joining the Avengers.

As with other fandoms based on comics adaptions, Loki fans often draw on multiple canons, writing fic which blends the movie verse with Loki in the comics, as well as with elements of the Norse Mythology which originally inspired the comics. Fanworks frequently give Loki considerable magic powers (sometimes called "seidr" in fic, after the Old Norse term), beyond what he exhibits in the movie canon, though not necessarily the comics.

Although raised as an Asgardian, Loki was born a Jotun, a Frost Giant, traditionally an enemy of Asgard. As well as being a source of much of his angst, Jotun Loki is a popular subject for fanworks. Fanartists revel in drawing him blue and designing new costumes, and there are multiple alternate universe fanfics exploring Loki being raised as a Jotun rather than Asgardian. In some works Jotun Loki may be intersexed, or have exotic genitalia or other physiology. Works sometimes feature Jotun Loki going into heat. Horns are popular in fanart, although not seen on the Jotun in the movies. 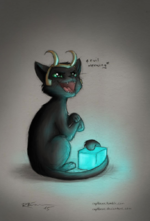 Lokitty fan art by captbexx, as of December 2018 it had over 3400 notes on Tumblr

Lady Loki - Loki being fem-presenting - is part of comics canon (he took Sif's body for a time) and many fanworks portray a female Loki, either the comics version, or a genderswapped version of his MCU incarnation. However, it is important to note that the comic version of Loki is canonically genderfluid, shapeshifting between different gender presentations as particularly shown in the Agent of Asgard comic series. Additionally, Loki's genderfluidity is briefly confirmed in the Loki TV series.

In comics if not movie canon, Loki is a shapeshifter, and there are a number of fanworks featuring Loki turned into a cat, either by accident or design. In fanart Lokitty is most commonly depicted as an all-black cat with green eyes, sometimes wearing Loki's horned helm and green cape; or else as human-Loki with cat ears and tail. Thor is sometimes depicted as a dog to match (often some kind of retriever). 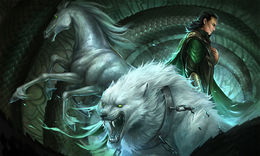 fanart by sandara of MCU!Loki with Sleipnir, Jormungandr, and Fenrir.

In Norse mythology, Loki has a number of monster children: the 8-legged horse Sleipnir, the wolf Fenrir, the serpent Jörmungandr, and the undead lady Hel. In the comics, they're occasionally brought up. In the Thor movie, Sleipnir is briefly seen but never discussed; Thor: Ragnarok redefines Hela as Odin's daughter (Loki's older sister) and Fenrir as her monstrous pet. In fanworks, though, the children appear frequently:

Mpreg is very popular in Loki fandom, especially as Loki (in Norse canon) gave birth to the eight-legged foal Sleipnir. In some works Loki may take female form to bear offspring, or else frost giants may naturally be able to give birth.

Because the Norse god Loki, in the form of a mare, mated with the stallion Svaðilfari to mother Sleipnir, a fan meme has Loki *ahem* admiring horses.

In the Marvel Thor comics shortly before the first Thor movie came out, Loki was killed, and brought back to life as a child version of himself for a redemption story in the comics Journey into Mystery. This version is usually called Kid!Loki. Later, in the Young Avengers comics, Loki became an older teen and was given his own series, Loki: Agent of Asgard. This version of comics Loki has its own fan following, though not nearly as large or active as the movieverse incarnation of the character.

Additionally, some fanworks use kid!Loki to describe a de-aged version of the movie character.

The Loki in the Loki TV series is a variant of the original that is captured in 2012 by the TVA, and so goes on a very different trajectory than the Loki of the MCU films. To distinguish between the two in discussions or fanworks the two Lokis will sometimes be given tags to distinguish them, the Loki that experienced all the films is sometimes referred to as Ragnarok!Loki or IW!Loki, to indicate that he experienced the events of Ragnarok and Infinity War. The Loki of the TV series is sometimes tagged as TVA!Loki, to indicate that this is the Loki that was involved with the TVA storyline.

Loki/Thor (Thorki or Thunderfrost): arguably Loki's most significant relationship is with his adopted brother Thor. In fandom, this relationship is often written as an incestuous or pseudo-incestuous slash pairing, though there is a significant amount of gen fic exploring the platonic fraternal relationship. Some of the slashfic explores a worldbuild based on old Norse culture, where being the receptive partner is seen as "unmanning" you (a serious drop in social class), so gay male relationships need to be even more secretive (though magic/seidr is also seen as a womanly art, so using magic "unmans" you to the same degree).

Loki/Tony Stark (Frostiron) became especially popular after The Avengers movie. As one fan noticed while compiling Loki smiles for a vid, fully half of Loki's smiles in The Avengers are found in his interaction with Tony Stark, which certainly comes across as flirting (at least prior to him flinging Tony through a plate-glass window).

Loki/Grandmaster became popular upon the release of Thor:Ragnarok, with people guessing how Loki was able to win the Grandmaster's favor in under two weeks. Given that the Grandmaster rules a slave planet and executes people seemingly at whim, this is often portrayed as NonCon or at least DubCon, with Loki putting up with acts he doesn't want (including being drugged, bound, transformed, overstimulated, or undergoing body modification) either because it's the best way to gain favor (consensual to lightly DubCon) or because refusing the Grandmaster's whims could have serious consequences (strongly DubCon to NonCon), or sometimes because he literally isn't allowed to refuse (NonCon).

After the airing of the Loki TV series the pairing of Loki/Mobius M. Mobius became popular.

During the TV series the pairing of Loki/Sylvie was common and later became canonical. However, this pairing was surrounded by a fair amount of controversy, because Sylvie is herself a Loki variant, and this was seen by some as a type of selfcest.

The polyamorous pairing of Loki/Mobius M. Mobius/Sylvie awakened some fannish interest during the first run of the Loki TV series.

As a villain, Loki is something of a contended figure in fandom. Some fans prefer to interpret him as sympathetically as possible, and blame his psychological damage on his adopted family, especially Odin ("Odin's A+ Parenting" is a common fan shorthand for Odin being a terrible parent) and Thor. Other fans prefer to view Loki in a more villainous light, interpreting him as dark, sociopathic, or just evil. Wank can erupt when fans from these diverging schools interact.

Fanfiction.net and AO3 Archives and Communities