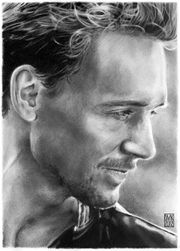 Tom Hiddleston (born February 9, 1981) is an English actor best known for his role as Loki in the Marvel Cinematic Universe. Fans also enjoyed his performances as Prince Hal/Henry V in The Hollow Crown, Coriolanus in the Donmar Warehouse & National Theatre Live production of Coriolanus, Sir Thomas Sharpe in Crimson Peak, and Jonathan Pine in The Night Manager.

Hiddleston has been nominated for and won a number of awards for his work both in theater and on film.

Fans often refer to him as "Hiddles" and to themselves as Hiddlestoners. While he gained a significant fandom through his portrayal of Loki after the release of Thor and The Avengers, not all fans of Loki are necessarily Tom Hiddleston fans or vice versa, but there is significant overlap. He seems to have fully embraced the Loki fandom. Some fanworks feature Hiddleston interacting with Loki, such as the Loki and the Loon webcomic, in which Tom and Loki are roommates. Tom is even sometimes paired up with Loki.

Hiddlestoners know Tom for being ridiculously polite, for his "ehehehe" laugh, and sometimes for both at once. Fans also love his cheekbones and intelligence.

In RPF, Tom most often paired with original characters or with the reader. Otherwise, he is popularly paired up with other MCU actors Chris Evans and Chris Hemsworth, or with Benedict Cumberbatch, a known friend of his. In 2016, Hiddleston appeared to have a whirlwind romance with Taylor Swift, but not much fic came of this -- just a lot of media speculation.