Art Deco Avengers Tarot is a fanart tarot by Julia Cross. It features Agent Phil Coulson as “The Hierophant” Chiron, Thor as “The Sun” Apollo, Tony Stark as “The Magician” Mercury, Steve Rogers as “Strength” Herakles, Bruce Banner as “The Hermit” Cronus, Natasha Romanov and Clint Barton as “The Lover” Aphrodite and Adonis, and Loki as “The Devil” Pan.

One pice of the set, The Sun, was shown to the Avengers actors when they appeared on Jimmy Kimmel Live! to promote Avengers: Age of Ultron. 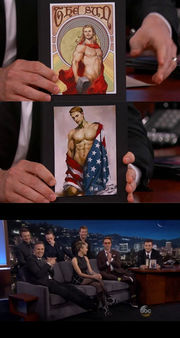 The cast of the Avengers series seemed to blow up the Internet when they appeared on the set of Jimmy Kimmel Live! to promote the upcoming Avengers: Age of Ultron movie. There was a rather R-rated game of telephone, some wildly chaotic Family Feud, and of course, all the madness that accompanies a whole cast of intoxicated celebrities.

Of course, Kimmel had a little fun with the cast by showing them evidence of just how creative their fans can be by whipping out a small collection of fan art. While this included the few standard slash fan art, especially from the Tony/Bruce science bros pairing, it also included two nearly nude pieces of both Thor as “The Sun” and Steve Rogers dressed in only an American flag. Those art pieces received a bit of a different reaction from the audience, inciting ooo’s and aaahh’s.

These two pieces are by Chinese artist Julia Cross (菊叔) with the first being a part of a set that’s been making the rounds on Tumblr for some time. The entire set, labelled “Art Deco Avengers Tarot” features characters from 2012’s Avengers as different tarot cards and gods in Cross’ beautifully painted style. The entire set, which can be viewed on the artist’s Pixiv or here on Tumblr, has Agent Phil Coulson as “The Hierophant” Chiron, Thor as “The Sun” Apollo, Tony Stark as “The Magician” Mercury, Steve Rogers as “Strength” Herakles, Bruce as “The Hermit” Cronus, Natasha Romanov and Clint Barton as “The Lover” Aphrodite and Adonis, and Loki as “The Devil” Pan. Some may question the logic of casting two characters who are gods themselves as different gods, but there’s no doubt that the outcome is beautiful.

The segment seems to be part of a growing trend on talk shows where hosts show actors the slash fan art or fan fiction that runs rampant in fandom circles on websites like Tumblr, deviantART, and Pixiv. Graham Norton gave Michael Fassbender and James McAvoy a similar treatment when they were on his show promoting X-Men: Days of Future Past. Some fans have commented on the trend with criticism, saying that it is a way of shaming fans and making celebrities uncomfortable. But if Cross’ Tumblr posts in reaction to her art being featured on Kimmel are a reflection of her true feelings, she was pretty thrilled. “I just want to say, thank you tumblr! Thank you guys!!!!” she wrote in response to Captain America star Chris Evans in particular seeing her fan art. “I think he was happy? It’s my greatest honor!” Obviously, Cross’ experience will not be universal to all artists whose work was featured on the show, but it’s good to see that at least one artist was ecstatic.[1]