A fanart tarot is a tarot deck illustrated with motifs from a fandom, often characters but sometimes also items that have significance in the fandom. Often only the major arcana is done. Fanart tarots are often created collectively in a community akin to a themed challenge, and fanartists pick or are assigned a card to illustrate. But there are also single creator fannish tarots.

For the Supernatural vid Carnival of Rust absrip manipped several SPN tarot cards that are featured in the video and because there was a lot of interest in the cards she later posted them separately in full size.

Tarot cards became popular within Bioware fandoms in 2014, after Dragon Age: Inquisition featured them heavily in game. This has also lead to many artists drawing cards in a style inspired by Inquisition, even if the card itself is not related to Dragon Age. 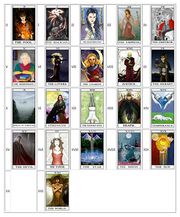