Heaven Official's Blessing, also known by its Chinese title "Tian Guan Ci Fu" or TGCF, is a danmei cnovel by Mo Xiang Tong Xiu. It was serialised on JJWXC between August 2017 and June 2018.

Eight hundred years ago, Xie Lian was the crown prince of the Xian Le Kingdom and was a beloved and respected leader. He ascended to heaven at a young age, but was cast down a short time later. He ascended for a second time and stayed in the heavens for the same time it takes to burn a stick of incense (about five minutes) before being cast down again. Now, he ascends for the third time as a laughing stock of all three realms.

The story has 244 chapters and 8 extras.

On October 26, 2019 multimedia site Bilibili announced a donghua adaptation of the novel would be coming in 2020[1]. The first season was released October 2020 - February 2021. The show became available on Netflix in April 2021.

A manhua adaptation is currently ongoing since 2019, with art by popular fanartist Starember and is able to be read on Bilibili in Chinese and English. There are currently four completed volumes.

A live-action series is scheduled to begin production in 2021, which is to be directed by Chen Jialin.

The main character of the novel and former crown prince of Xian Le Kingdom.

The romantic interest of Xie Lian and Ghost King (鬼王) of the Heavenly Realm.

Shipping preferences differ between Chinese and English fandoms, but Hualian is by far the most popular. On AO3 it takes up the majority of fanfiction available. As many fans dislike having the main canon pairing being broken up, other ships featuring Xie Lian and Hua Cheng are not as popular, but are still available. Some examples include shipping Xie Lian with Feng Qin, Mu Qing, Jun Wu, or Shi Qingxuan. Hua Cheng is sometimes shipped with He Xuan, and the Hua Cheng/Mu Qing ship has also been recently been gaining popularity.

The completed English translation is by Twitter user Suika. Suika is credited for bringing the TGCF novel to an international fanbase, and is also credited for the popularity of the novel. Suika famously translated one chapter per day and would make daily updates on the Google drive holding the translation, until all 244 chapters (and eight extras) were completed.

After the series was finished translating, Suika also released pdf, epub, and mobi translations of the novel, all which can be found in the translation carrd. (The eight extras were translated by other people and are not included in the compiled ebook version.)

Twitter user cucumberbros drew art of the ship Ming Yi/Shi Qing Xuan and posted it to the website Privatter and locked it with a password. The password was the ship name and they represented each character with an emoji to hint at what the password should be. The emoji was a meatbone and leaves falling in the wind (🍖🍃), which soon circulated as "beefleaf". The ship name in English is now almost exclusively referred to as "Beefleaf".

The international fanbase is largely credited for popularising the slash ship known as "fengqing", a fanon pairing between Feng Xin and Mu Qing, two characters who are very belligerent towards one another in canon. Among Twitter users, its common to see "fengqing mains" (people who ship the two immensely) use the sword (⚔️) & bow and arrow (🏹) to depict their corresponding weapons. Another common portrayal of the two includes the cat and dog (Mu Qing being the cat, Feng Xin being the dog). The most common dynamic associated with the ship is Rivals to Lovers, with many fics taking place in the time after canon when it is implied that Feng Xin and Mu Qing will finally be able to start setting their differences aside.

On August 5, 2021, the manga and novel publisher Seven Seas Entertainment announced that they had acquired the licenses for all three novels by Mo Xiang Tong Xiu: Tian Guan Ci Fu, Mo Dao Zu Shi, and Scum Villain's Self Saving System.

Each novel will be separated into multiple volumes, with the first volumes becoming available on December 7, 2021. Pre-orders became available as the announcement was made on the company's Twitter.

Tian Guan Ci Fu will be separated into eight volumes, the first of which will release on December 7, 2021. The translation for the official release was done by Suika and edited by Pengie, with the cover art by 日出的小太陽 (tai3_3) and internal art by ZeldaCW.

The release schedule for Tian Guan Ci Fu's English translation is as follows:

Volume 1: December 7, 2021 (pre-order available as of the time this article was written)

Chinese fanspaces are known for being both impressive yet vicious. Debates throughout the fandom take an alarming turn most of the time, as people spew death threats and argue about canon and post-canon parts of the novel. Despite having a few menacing fans, the Chinese fandom is overall extremely welcoming and is quite notable for their historically accurate cosplays and unlimited fancontent (largely thanks to TGCF being native to China). 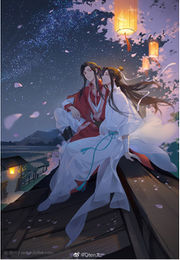