International Focus Request: Help! Editors need some assistance with including international and/or non-English perspectives on this page.

The Untamed (known in Chinese as Chén Qíng Lìng or 陈情令) is the live-action adaptation of Mo Dao Zu Shi.

The adaptation was announced in March 2018 with the first two actors, Xiao Zhan and Wang Yibo, announced in April. The series started airing on June 27, 2019 on Thursday and Friday with two episodes each day.

Due to censorship laws in China, all explicit romance between the main characters was removed from the story. In addition, some morally-grey characters were made into more black-and-white good vs evil characters. Despite the censorship of the romance, many fans were surprised at what was left in and felt that if the show was viewed with the original story in mind, it wasn't difficult to construe a romantic relationship between Wei Wuxian and Lan Wangji. Key moments include being trapped in the Xuanwu Cave with most of the dialogue intact, and a scene that replaces their first kiss during the Hunt on Phoenix Mountain where Wei Wuxian calls Lan Wangji his "soulmate".

The series became available on Netflix in North and South America, Europe, India and Philippines in October 2019, expanding the fanbase as the show reached a wider audience.

July 12, 2019 saw the first Untamed fan meeting[1] followed by a Roadshow that stopped in Hangzhou, Xi'an, Wuhan, Shanghai and Qingdao. Another fanmeeting took place in Thailand [2] on September 21, 2019. November 1, 2019 will see the final fanmeet in Nanjing,[3] with the event selling out in just 5 seconds.[4] 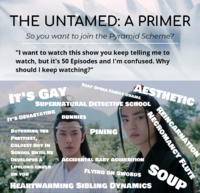 "So you want to join the Pyramid Scheme?"

In English-language online fandom, MDZS and cdrama fans began watching the show via WeTV, Viki, or Youtube in July/August before it was released to Netflix, so the English-language fandom began gathering steam even before there was easy access to the show. Slash fans and others who had not previously been in cmedia fandoms then heard about the show and joined in. The pattern of the fandom's spread has led to it being called "the ancient Chinese gays pyramid scheme".[5]

From a December 2019 review by Film Daily:

Fans of the series knew the regulations it was up against in China and were careful to protect the storyline. In discussing The Untamed online, chatters avoided explicit mention of the show’s gay undertones, referring to the topic using the misleading but politically charged hashtag “socialist brotherhood” in hopes of avoiding attention from regulators.[6]

There is also an RPF fandom based around the cast: The Untamed RPF. 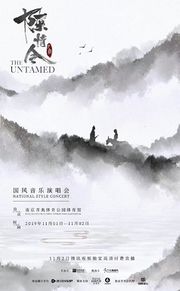 Poster for The Untamed National Style Concert at Nanjing

In The Untamed, the juggernaut ship is the canon pairing of the two main characters, Wei Wuxian/Lan Wangji (Wangxian). Other popular ships include:

Some less prevalent ships/rarepairs include: 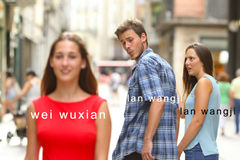 Case Fics are fics where the main plot centers around a mystery or a problem that the characters have been sent to solve, usually in their canon roles as cultivators or in a 'modern with magic' setting. These tend to reflect the canon by having the characters deal with creatures from Chinese Mythology.

There are also fics where the characters are creatures from Chinese Mythology, such as dragons or huli-jing. It is popular in fanart to portray AUs where Lan Wangji is a dragon and Wei Wuxian is a fox. They are often shapeshifters but not always. See Dragonji and Foxxian.

Fusion AUs are also popular, particularly with properties such as Jane Austen books. Relatedly, there are a subset of fics that aren't fusion but instead lean into genres such as Gothic Horror.

There is a popular fanon that Lan Wangji played 'Inquiry' to seek Wei Wuxian's ghost in the years between Wei Wuxian's death and return. The source of this is sometimes pointed to the fic 'Letter for Xian' translated into English by 6989 from the Chinese fic 与羡书 by 蓝忘机. See Inquiry.

There are many fic events and challenges, usually based around a character or ship. These are usually publicised on Twitter or Tumblr, with group chats held on Discord.

One challenge was in response to the XiYao Troll, where XiYao ficwriters came together to celebrate their ship in spite of the cruel comments they were receiving.

In English-speaking fandom, there are numerous meta essays, overviews and primers that explain various aspects of Chinese history, culture, linguistic wordplay, etc. in the context of The Untamed to help guide a non-Chinese audience. There is also meta discussing the differences in characterisation, plot, etc. between the original novel and the TV adaptation.