A Social Media AU or SMAU is a type of fanwork where fans create graphics that look like social media accounts for fictional or RPF characters. The type of visuals vary, from creating profile pages for the character to what their feed would look like. Some are like small fics, where the character "posts" a picture and other characters respond or comment on their pic, sometimes this will involve a series of posts and responses between the characters. It can sometimes be very similar to Text Fic but in a visual format.

The term SMAUs has come to cover a variety of multimedia or epistolary fanworks, including "analog" ones which do not rely on the internet. 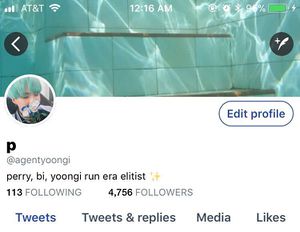 The first image in doofenperry twitter au!!!, showing Perry's account and Yoongi icon and establishing him as a BTS stan

On Twitter, the Twitter AU thread thread evolved and became a popular format for longer form storytelling within K-pop and related fandoms. (See the History section below.) These social media AUs generally assume a high level of social media literacy to understand what small details of the format indicate, such as the layout of a Twitter profile, the ratio of Following to Followers, numbers of likes and retweets, etc. Manips are usually created with an online generator that replicates the appearance of Twitter and other social media.

There are some elements in the format of Twitter AUs that are generally consistent. They usually start with a Title/Summary tweet and manip images of the featured character's Twitter profiles, before launching into the story of the AU. Elements that are also common are an accompanying gif/graphic in the first tweet, use of Twitter's poll feature to let the audience decide the course of the story, and rules explaining how to interact with and interpret the AU - e.g. "quote retweet, don't reply!", "timestamps mean nothing."

Social Media AUs on Twitter do not always follow the same format. Some writers include larger amounts of prose text, getting around Twitter's character limit by posting an image of a screenshot of the text. Since these works are told mainly in the form of manip images, the use of the captions varies. They may be used for author's notes, numbering installments of the work, etc.

The terms "Social Media AU" and "Twitter" have spread/evolved on Twitter, and these works may now be referred to as simply as "AU," the way one might refer to an AU fanfic. Some AU writers create separate Twitter accounts just for their AUs.

The interesting thing about Social Media AUs is that you have to pretend everyone involved is now the type of person to live the details of their life publicly on Twitter, at least to an extent, which means you have to accept a level of OOC behavior no matter what the AU is. The characters also tend to use slang and memes popular in stan Twitter, rather than how they speak and interact in their respective canons. This creates a story that is often entertaining, but not the most in-character. Few, if any, characters have distinctive tones for their internet interactions, as opposed to earlier internet-messaging based original works like Homestuck.[1]

Social Media AUs on Twitter, also called Twitter AUs or "socmed AUs", exploded in popularity with the internationally viral BTS Outcast AU in January 2018. The original poster @flirtAUs gained 419,000 followers in under a week, while the posts reached over a million likes and retweets. The AU told a story through fake text message screenshots, and was notable for including an interactive element in which readers could vote in Twitter polls and influence how the story would continue, as in quests (a kind of interactive fiction).

In March 2018, the parodical doofenperry twitter au!!! was posted for the first time, poking fun at stan culture using Phineas and Ferb characters. doofenperry twitter au caused another shift in the trend of Twitter AUs. Stories became more likely to be humorous, leaning toward parody of social media. There was also an increase of stories for very minor fandoms that one would not expect to see a fanwork for, making the fact that the work even exists part of the joke.

A number of extremely popular IT Social Media AUs emerged in 2020-2021, leading to some non-fandom outlets taking notice:

On July 1, 2020, in the middle of worldwide lockdown, fans of up-and-coming indie rock band The Runners were posting selfies of outfits they were wearing to a maskless, non-socially distanced live concert happening that night in New York. At the encore, lead singer Eddie Kaspbrak confirmed yearlong speculation of his romantic involvement with a fan, Richie Tozier: he announced that the next song would be a tribute to Tozier, closing with "I love you. Happy to do it."
This concert didn’t actually happen. And the band doesn’t actually exist. But everything else—including the fact that “HAPPY TO DO IT” was the 16th trending US topic for a few hours on Twitter—was very much real.

In 2022, several Our Flag Means Death SMAU stories became extremely popular and were held up as examples of an evolution of the genre, in which the term "Social Media" could include "analog" communication, such as notes, faxes, pagers, etc.

Twitter user @MystiqueWaves wrote a popular Twitter thread about the Piña Coladas SMAU, whose timeline started in the 1980s. While they later agreed that these evolutions pre-dated OFMD fandom, the thread showcases the diversity and popularity of these fanworks[3]:

The fact that no one has mentioned how OFMD has revolutionized social media and analog AUs is mind boggling to me [...]

Its originally a form of Outsider POV, bc u are trying to tell the story from a third party with no personal intel of the story/relationships that happens. There are no middling paragraphs. The writer is supposed to make U feel like an overinvested fan, or a historian, or just some kid that stumbled into reading something they shouldnt've, and piecing all the clues together. [...]
But OFMD writers [...] communicated dialogue through group chats, controlled narrative through protected tweets and portrayed action through a max of 5 paragraphs at a time. The sheer courage of doing it all REAL TIME ON TWITTER?? ITS INSANE


And as if THAT ISNT ENOUGH, Lottie @faeeebaeee single handedly took it ONE STEP FURTHER by writing letters, showing snapshots of scenery, fucking PAGERS?? I have been reading fanfic for a DECADE and i have NEVER seen anything like it outside published BOOKS.

Other fans countered that this new iteration pre-dated OFMD, and that rather than being truly revolutionary it was a natural evolution of the format.

Some fans argued that "analog social media AU" (or "AMAU") was a contradiction in terms. Others are the opinion that these are a resurgence of epistolary or mixed-media stories:

[@amuseoffyre]: I was thinking the other day that the SMAU popularity has a long legacy. 20 years ago, there was The Shoebox Project, which was like super-mega-concentrated SMAU, only set in the Marauders era of HP-world, so made up of letters and photographs and suchlike.

[@ghostalfanserv]: And then Written by the Victors in SGA! And there were a buuuunch of LJ AUs in the Merlin fandom, iirc.

[@EffingGravity]: A SMAU is like, epistolary fic with fun graphics.

Others highlighted the differences:

SMAUs remind me of epistolary stories, but in a revolutionary new way for the 21st century, and with the added bonus of being able for readers to respond to it in real time? amazing.

It’s basically transmedia storytelling but already in one place and neatly curated for the reader to immerse themselves. It removes the scavenger hunt part of transmedia and the prose parts are subverting the “pretend it’s real at all cost” aspect that’s often used.
It removes barriers from the genre while still keeping the main excitement of transmedia.

In the 2020s, some Social Media AUs started including the reader's online presence, making self-insert or y/n SMAUs.

[Anonymous]: Bubbly enthusiastic reader texting bench trio? The reader couldn't sleep so they text their best friends to play Minecraft with them at 2am. And bench trio saying "no go to bed >:(" bubbly cute stuff!

SMAU’s are really weird!!! They’ll be talking in aave and using gifs and I’m just like why?? Also why is the storyline iPhone messages, most people in Japan use something like Kakoatalk😭😭

[savnofilter]: LMAO im so glad peoole agree sisjjss i hate smaus sm. and yes!! apple is only big in the U.S so its funny that they use iphone format. its western influence that makes everyone think seeing the blue text bubbles are superior. [...]

[Anonymous]: Ngl I really hate SMAU because. They're not diverse at all. It's always a fem reader. I'm all for fem, male, whatever readers. But the thing is, on top of no diversity, they're all so formulaic and it gets really annoying and a lot of the time the characters (imo) are OOC. As a Transmasc nb, I just wanna see some writing for people in the lgbt and more POC readers yk?

[savnofilter]: YES YES YES. and i think the problem is that the reason why i dont do smaus myself is because you kinda need to understand how the character really talks to make text conversations. it ends up reading real choppy and inaccurate.

[peachiimilquetea]: i hate the ones that use emojis and meme references to the extreme like you really think inumaki is texting people and saying "yas hunty boots the house down 😍🥺🕺🏻🥵✌🏾"

This was a particularly prevalent argument in reader SMAUs, to the point that fans created guides to making them more inclusive.[11]