Phil Coulson is an agent of SHIELD in the Marvel Cinematic Universe, mainstream Marvel Comics continuity, and Ultimate Spider-Man (cartoon). He is portrayed by actor Clark Gregg.

Phil Coulson appeared as a recurring character in the Marvel Cinematic Universe, appearing in the first and second Iron Man (2008, 2010) films, Thor (2011), and The Avengers (2012). Based on his popularity, his character has also been incorporated into mainstream Marvel Comics continuity in 2012 as well as Ultimate Spider-Man (cartoon) starting in April 2012 to the present. Coulson makes a by-name cameo appearance in the Iron Man: Armored Adventures in March 2012.

Agent Coulson was killed by Loki during the events of The Avengers, his death being used to spur on the team. However, due to his popularity and the success of the fan-run "Coulson Lives" campaign, he is currently alive and starring in the ABC series Agents of SHIELD which began in September 2013. In the first season, much mystery surrounded how he had returned to the living, and how much Phil actually knew was not certain. It's hinted at in the pilot for the show that he was in Tahiti or at least believed he was in Tahiti[1]. Fans theorized about how Coulson came back to life. Popular theories included that he was brought back by magic or he was a robot[2]. Neither was the case. In fact, Coulson was brought back to life by a drug created from Kree DNA.

Fanon and Common Tropes in Fanworks

Coulson Lives was a fan movement to bring Coulson back to life after his death in The Avengers (2012).

Since the premiere of the Agents of SHIELD show, the most common pairings remain Clint/Phil, Phil/Nick Fury, and Phil/The Cellist. However, with the new characters introduced by the show, other pairings are gaining popularity: Phil Coulson/Melinda May, Phil Coulson/Lola, Phil Coulson/Leo Fitz/Jemma Simmons, and Phil Coulson/Grant Ward.

The pairing of Phil Coulson/Skye has increased in popularity in recent seasons, and the gen pairing of these two characters also appears. Some fans dislike pairing Coulson with Skye for a number of reasons. Some believe Skye views Coulson as a father figure, and dislike shipping a younger woman with a much older man. Others prefer to ship Phil with May, and view this ship negatively as a result. 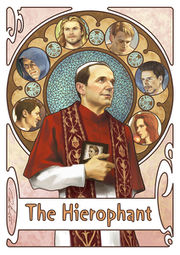