In The Falcon and the Winter Soldier fandom, the chin-stroking scene refers to a scene where Helmut Zemo pretends to be exchanging Bucky Barnes for the information about the recreation of super soldier serum (as a part of their undercover mission plan) while playing with his chin.[1] 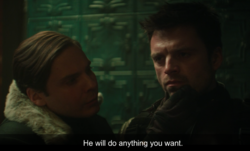 "He will do anything you want." - Helmut Zemo

Daniel Brühl (Zemo) said in an interview that the scene had been improvised, and that Sebastian Stan (Bucky) had been suffering as there had been a couple of takes where he couldn’t have dealt with it.[2] Sebastian Stan confirmed this on his instagram story; claiming that there had only been one take where he hadn't laughed (which was the one they used).[3]

Demands for the Bloopers

The way Daniel and Sebastian described things that had been happening off-screen fueled fans' curiosity and excitement for the bloopers. Unfortunately, the bloopers weren't included in "The Making of The Falcon and the Winter Soldier".

[frumosseb on Twitter]
daniel brühl confirming that he in fact improvised the scene of zemo playing with Bucky's chin, lmfao faghajakakak. marvel better give me the footage of sebastian stan losing it 👁👄👁🔪[4]

[fan on Discord]
the fact that there's only one successful shot of that scene and it's the one in the series really makes me sad that marvel didn't release bloopers of it. i just want to see daniel and seb constantly cracking up

There are two divided takes on this scene. Some consider this scene as Zemo merely showing his queer side, but others see this scene as a way for Zemo to assert his power over Bucky.

[JAKEJILLENHAUL on Twitter]
my main takeaway from this episode is that Zemo is part of the alphabet mafia cus there was no reason for him to be rubbing on bucky’s chin like that or pointing out that there’s a bit of green in the blue of Steve’s eyes.[5]

[missingIinked on Twitter]
the fact that people took the scene where zemo is holding bucky’s chin as a way to exert his power over bucky and bucky getting visibly uncomfortable and made it about zemo being gay is very weird to me.[6]

Many fans believe the words "He will do anything you want" refers to the one controversial MCU trope - Hydra Trash Party - that had been going around since 2014. Fans of the trope called of the day it came out as HTP confirmation day,[7] and antis of the trope found it disturbing that Disney had found a way to confirm it. Some were upset by how the funny behind the scene had watered down the implication of the actual scene. They commented on the way Sebastian and Daniel were able to laugh it off on set, questioning if it was the ignorance about abuse issues.[citation needed]

The scene contributed to the rise of Bucky Barnes/Helmut Zemo (Winterbaron) pairing. Many fans noticed the Sexual Tension between the two characters, making BDSM a common trope in fanworks. The implication of Hydra Trash Party in the scene did make the shippers the objects of ship-shaming, which was at its peak around April-June 2021. Although some shippers genuinely enjoy the abusive trope, not every one is taken a liking towards it. Some of them complained about the hate they had been getting, claiming that all that they ever wanted for Winterbaron were comfort and growth in their relationship. Winterbaron remains a diverse pairing with different shippers liking different dynamics and tropes - Dead Dove, Hurt/Comfort, and Fluff included.