Sometime in late 2011 or early 2012, Marvel Cinematic Universe fandom began characterizing Clint Barton as someone who crawled through vents and air ducts as a standard mode of transportation, eavesdropping, and hiding. A number of fics also have him sleeping or living in the air ducts, humorously referred to (given his name, Hawkeye) as "nesting".

When and where this trope began is not entirely clear. It even has its own tag on AO3: Ceiling Vent Clint Barton. The result, regardless, is a broadly accepted character trait that had little to no clear basis in canon until the Black Widow (2021) movie canonized it many, many years later. 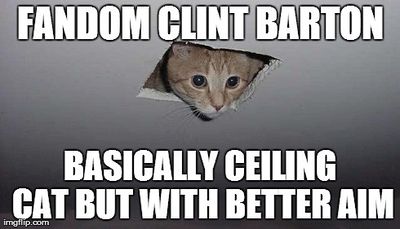 A meme comparing fandom's Clint Barton to ceiling cat, created by Tumblr user iffeelscouldkill. The text on the original post reads, "I’m pretty sure that Clint Barton’s ceiling duct/ventilation system habits are 100% fanon, and they are amazing. I will never get tired of reading fics where Clint randomly pops out of the ceiling. But tell me I’m not the only person whose mind instantly goes to this?"[1]

Origins of the Trope

In June/July 2014, 2 Tumblr threads attempted to determine the origins of the trope. They are reproduced below in threaded order, in an attempt to preserve some of the context of the conversations:

wrangletangle: My question is, why are there only 37 works tagged with it? Come on, fandom!

gritsinmisery: Calling all authors: if you’ve written Clint in a vent, go tag it!

iffeelscouldkill: YES YES DO THAT THING.

(I already reblogged this earlier on in the “conversation” but now there’s MORE!)

clio-jlh: I feel that this tag arose after I wrote this particular trope. However, I will retag immediately!

(A High Road Out From Here, in case you’re curious)

wrangletangle: The tag was canonized in either August or September 2012, if my memory serves, so you are correct.

I’d really love it if someone could do an analysis of when and how this trope developed. It’s one of the more distinctive and pervasive character-specific tropes to have absolutely no basis in canon whatsoever. It might make a good example of how character traits are developed and codified within fandom.

secretlymartinfreeman: that would be really cool, actually. i’d totally read it.

clio-jlh: I saw someone mention William Brandt but my mind keeps going to that story where Tony turned all the roombas sentient and they ended up in the ducts at SHIELD? Does anyone else remember this?

wrangletangle: Ordinary Workplace Hazards was started April 23, 2012. I’m fairly sure Clint in the air ducts was already a thing by then. However, that fic probably did contribute to the popularity of the trope. (After all, it’s not just about where the trope started but also how it came to be effectively canon for a huge chunk of fandom, and over 100K hits is a good start.)

Brandt’s also a possibility, like Sam said. Someone want to start a Fanlore page about this, where we can collect data?

neierathima: I know the fic you speak of that is quality. But what I recall is that was a thing before the Avengers movie, when it was actually canonized as “Barton likes high places.” Maybe it’s a sniper thing?

pravdagirl: The roomba thing is scifigrl47, but I don’t think she was the originator? Anyone know the source of this trope? Because I pretty much love it. I think it happens so much because you say spy/sniper and people think of surveillance from a hidden vantage point, and who expects murder to come their way from a ceiling vent?

scifigrl47: I originated the Roombas, but not Clint hiding in the vents. I don’t know where I picked it up. Pre-Avengers, I was super excited to find out that my childhood favorite Hawkeye was going to be in the movie. One of my first acts upon discovering AO3 was to read the Clint fics. All of them. Clint/Nat, Clint/Phil, Clint/Darcy, Clint/ANYBODYANDEVERYBODY. I did not care, if it was Clint, I read it.

The sniper thing did factor into it, and there’s a solid background of ‘sneaky Hawkeye sneaking’ in the comics, but for a guy with a bow and arrows in a purple suit, he spends a lot of time attacking head on. If I had to guess, I’d say I picked it up from a sequence of Clint/Coulson stories that have since been taken down by the author. I seem to recall it factoring in there, but they’re gone now so there’s no way to double check.

jizzdrifting: I know of a couple of comics from Clint’s few solo runs that have him ducking through the vents. Notably my personal favorite, and very first comic I ever owned, the one where Clint emos off into the mountains after the death of his wife, finds and frees a werewolf thing, gets a new costume with LESS FABRIC THAT BEFORE (amazing), and then he and his new werewolf friend break into a place through the ventilation system. Hmm, also War Machine shows up to be better than your favs.

Now I wanna know where the trope came from too damn.

circlenowsquared: There’s also the bit about Clint’s rough childhood, and hiding in vents because he was small enough to fit in there and stay safe until the yelling and violence was over.

ivyadrena: If you’re talking about Qt’s fics, they definitely had the vent element.

iamshadow21: I was literally only having this discussion the other day with actuallyclintbarton and actuallykatebishop, and I theorised that two stories in particular were pivotal to the development of the trope. My pick for the actual origin is the Adaptations series by snack_size, which was written for a kink meme prompt, but clio_jih’s story predates that, unless there was a significant delay between meme posting and AO3 posting.

actualkatebishop: I just saw your Avengers bad fic bingo game and omfg you've read fics with Clint living in the vents of Avengers tower?! I've never come across that but it sounds hilarious!

greaseonmymouth: oh my god that trope it’s the single most RIDICULOUS trope and i’m not sure where it even originated? because it makes ZERO sense for his character. <.< why the hell would an archer be in the vents all the time? ?? (i’ve probably even written it myself once)

but yes. i’ve seen it more in phil/clint fics and tony/steve fics where phil/clint might be background, than in any other fics, but i don’t know man. i’ve also got no sense for how prevalent it is today, as we made the bingo card about 1½ year ago, and i’ve stopped reading tony/steve since then, and i haven’t read much clint/phil either, i guess maybe a handful? so i don’t know. i’m in no way up to date on the current tropes in the mcu fandom…

actuallyclintbarton: CLINT IN THE VENTS! Started as a legitimate character quirk in a fic that I read very shortly after Avengers came out that I can no longer remember. The logic, in the fic, is that that’s where he goes when he’s super stressed or upset or freaked out, because (taking from the backstory in comics) he had an abusive home life, and then a pretty-borderline-abusive/neglectful life in foster care/group homes, and he would hide as a kid in small spaces to feel safe, and he learned from a young age that people don’t often look UP when they’re searching for a kid, and so hiding in the air vents was the perfect mix of those two coping mechanisms, and he still fell back on them sometimes. It wasn’t his NORMAL mode of behavior, and it actually indicated that he was REALLY NOT DOING WELL in some way, and it made sense.

But then OTHER fics started using “Clint in the vents” without giving it as much context, and then they started using it as a casual thing, and then it became this huge fandom trope entirely divorced from the original “kind of shitty bad-mental-place coping mechanism from his abusive childhood” context that was the only reason it had made sense AT ALL.

And that is where the “Clint in the vents” trope came from.

actualkatebishop: That’s so interesting! I mean I could understand it from a crack fic perspective but as a realistic action for his character it didn’t make sense until you explained it, Mat. If you ever find it again, please send me the link! I’d be really interested in reading it.

actuallyclintbarton: Yeah, it’s pretty cool! And I doubt I will ever come across it again, but if I do I will be sure to link you! ^_^

iamshadow21: I am about 95% certain that what you’re thinking of is snack_size’s Adaptations series, which according to the notes was written for a kink meme prompt. Also noteworthy, though written some months later, is BobbiMorsed’s do the math, expect the trouble series, which has Clint doing the same thing when just recruited for SHIELD. Both are well worth your time, and both have Clint doing it because he’s fucked-up in some way, grief, hyper-vigilance, history of abuse, etc.

actuallyclintbarton: Shadow is amazing with the fic linkage, and Adaptations is indeed the fic I was thinking of! No idea if it’s as good as I remember it, but the context at least makes SENSE, which is all I ask for a ductwork fic at this point.

iamshadow21: I hope that it’s as good as you remember! I knew it pretty much immediately, because though it’s been a while since I read it (and though it does have echoes of former Phil/Clint) it’s essentially a Clint/Bruce story, and there is so very little Bruce, let alone with Clint. The other, I haven’t read in AGES, but from memory it’s got a solid big cast and Clint is deftly drawn.

I’m gonna fess up now and confess that I have written Clint-in-the-vents into a story, but he wasn’t living there, he was hiding there so he could snipe new recruits with Nerf darts because he was bored.

allmyfansquees: FWIW, the backstory of Clint’s canon childhood and how it plays into his affinity for high, hidden places where adults don’t look is encapsulated very neatly in one of scifigrl47’s head canons on ao3 here: http://archiveofourown.org/works/481388/chapters/837135

Please restrict examples to either early (pre-Avengers movie) works or works where Clint's presence in the vents constitutes a major point in the work, rather than a throwaway moment. Otherwise we'll be overloaded without visitors being able to see the development of the trope.

Clint and Phil hate playing pickup, but damn, Clint loves the Roombas, and damn, Phil loves Clint, though he's not really sure why sometimes. It's time to play Hide-And-Seek with hostile robotic AIs in the SHIELD home office.