Lotrips is an RPF fandom based on the actors who appeared in the The Lord of the Rings film trilogy. The name is abbreviated in many ways, but the most popular term may be "LotRiPS" (Lord of the Rings Real People Slash, and is often pronounced "low-trips".) Although the term uses slash for fanfic, art and vids, it encompasses het, femslash and gen as well.

Lotrips fandom emerged in early 2002, soon after the release of the first of the three films, The Fellowship of the Ring.

The extended DVD editions of the films, featuring cast commentaries on the films, long interviews, and short behind-the-scenes documentaries, encouraged the fandom and created a canon for fan fiction. The fandom was very active through the next two years, reaching its peak when The Return of the King won eleven Academy Awards on February 29, 2004. Since that time, activity has been dwindling, though a steady trickle of new fans joins in. 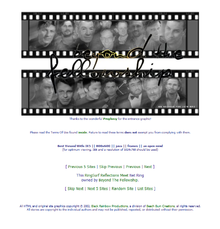 On December 28, 2001, Leetal founded the LOTR_RPS mailing list, which very soon buzzed with a staggering amount of talk and stories. April 28, 2002, saw the founding of the Closer Than Brothers mailing list, which focused more on the posting of stories and less on general chatter, and the associated archive Beyond the Fellowship (now lost). Parallel to the activity on these two large mailing lists, many smaller lists dedicated to specific pairings or topics sprang up, but the fandom also started to move to Livejournal more and more where another RPS fandom (Popslash) had already established itself.

The Fellow Shippers community on LiveJournal picked up speed after the release of The Two Towers, and became the main Lotrips fic community.

LiveJournal is still the center of the fandom, with communities based on pairings, including Rugbytackle, monaboyd, vigorli, domlijah and Bloomwood.

Mirrormere automatically archived fics posted to Closer Than Brothers mailing list for a while, and offers archiving to all. The Library of Moria also accepts LOTR RPS fic. Monaboyd.net hosts a large amount of Dominic Monaghan/Billy Boyd slash fic.

There have been many Celebrity RPGs (role-playing games) in LOTR RPS fandom. Hollyweirdos, begun in April 2003, was a meta/crack parody RPG that was more about Lotrips fandom than the actors themselves. One of the most-read RPGs was in the LiveJournal community lotr_porn, a Pornstar_AU game featuring a sex-positive pornography studio, with many LOTR and related celebrities as participants. In The Establishment, a multi-fandom RPS AU in which actors belonged to a kinky sex club, several pairings involving LotR actors were among the game's most popular.

LOTRPS was certainly a fandom which brought the crazy, helping coin such exciting terms as My hed iz pastede on yay and tinhat.