When a Fan Hits the Shit

When a Fan Hits the Shit is a self-published 352-page book by Jeanine Renne. It has the subtitle: "The Rise and Fall of a Phony Charity." 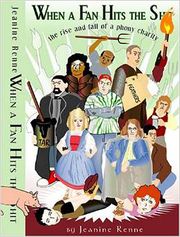 The book is an expose of Amy Player and other fans' fraud regarding Lord of the Rings and a supposed-convention called Tentmoot.

Amy Player came from a good family in Virginia. She attended Christopher Newport University for two years and worked at Busch Gardens in the summers. Pretty, bright, and a talented artist, it's hard to understand how she ended up creating a phony charity and fleecing half the cast of the "Lord of the Rings" film trilogy.

In 2002 Ms. Player created an online fan club in homage to actor Sean Astin and his character, Sam Gamgee. This club caught the eye of Abigail Stone, a fan from Oregon, and the women discovered two mutual interests: an obsession with Astin and the other actors, and the willingness to do or say whatever it took to meet them.

Abbey and Amy developed their fan club into a beautiful, professional-appearing website. They referred to themselves as "Bit of Earth," and claimed that they wanted to raise money "for charity." On September 11, 2002, Amy went to Washington, DC and approached Sean Astin after his speech at the Capitol (Mr. Astin sits on the President's Council for Service and Civic Participation). Amy asked him to help out her "fledgeling charity" by volunteering with other members to build a Children's Reading Garden for a public library.

Their planning was perfect. They knew that Astin, having just given a public appeal for active community service, could hardly turn Amy down. They picked those themes because Astin is a staunch advocate for literacy, and gardening would naturally lend itself to publicity for Astin's movie role as gardener Sam Gamgee. As luck would have it, Astin loved the idea of focusing the enthusiasm of LOTR fans toward a charitable community project, instead of the usual autographs and merchandise. He agreed to help build the garden!

With that kind of endorsement, membership in Bit of Earth rapidly expanded to hundreds of Astin's fans worldwide. All were told that BoE was working in direct association with "Reading is Fundamental" to raise funds and build gardens to promote literacy.

The garden was built in Beaverton, Oregon, in 2003, and Astin's presence gave them renewed international publicity among his fans. Other major LOTR websites covered the news and it seemed that the sky was the limit for Bit of Earth, with its small army of enthusiastic fans working side-by-side with celebrities to improve communities.

Then it all hit the fan. Amy got caught in a complicated lie, in which she tried to mooch free airline tickets for actors to fly from New Zealand for a Bit of Earth event. This resulted in a miserable trip for several actors. Two of them ended up sleeping on the floor of Amy and Abbey's filthy apartment, instead of the deluxe accomodations they had been promised for attending this "fundraiser."

After the discovery of one lie, hundreds more fell apart. Former Bit of Earth volunteers came forward with horror stories. Amy borrowed a friend's computer and didn't "log out," which gave open access to the official Bit of Earth email account, revealing hundreds of lies that attempted to manipulate celebrities, businesses, volunteers, etc. into supporting this fake charity.

When A Fan was written by one of their victims. It takes the reader through the incredible web of firsthand evidence, revealing just how the half-truths, exaggerations, blame games, and other manipulations were employed to swindle both fans and celebrities the world over. Even without the "high drama" of murder or huge sums of money, this book will fascinate you with the real-life details of con artists in action. [1]

I remember reading vague bits of this whole mess years ago, toward the end of its coming-apart. I definitely remember thinking, how could anybody be fooled to such an extent?? In my ignorance I couldn't imagine being so gullible as to accept these clearly outrageous claims and behaviors.

And then I became part of an online fan community for a wildly popular TV show, and found myself sucked in to a hoax so elaborate, and so rabidly defended and maintained by its acolytes, that when it finally unraveled I actually wrote to Ms. Renne to apologize for judging her and the others taken in by this scam. I'd like to think that my personal alarm system would have been activated by the money involved (our hoax, similar though it was, didn't result in any financial involvement, thank heaven), but we all certainly accepted some pretty crazy, outrageous stuff.

In other words, no matter how incredible it may sound, it's definitely a possibility, and always something to be aware of and on guard for. Stay safe, people. [2]

For those that want extensive documentation, copies of legal records and such regarding Amy Player/Jordon Wood and other activity surrounding the debacle will definitely want to pick this book up. You can find a play by play of the drama online, but this book collates everything into an easy-to-digest timeline that occurred up through 2004 and is a must-read for anyone interested in the TentMoot and Lord of the Rings Cult. Especially invaluable to those looking to research the main antagonists actions prior to moving on to other fandoms and re-branding himself as "Andrew Blake" in order to sucker in the lonely and pull the same scams and dangerous activities that he has been doing for over a decade. An excellent cautionary tale. [3]

This particular sideshow? Worth the price of admission. Really.

Renne, whether or not it was her intention, has presented two highly memorable anti-heroes. Without in any way diminishing the reader's natural sympathy for the fraud victims, she nevertheless fascinates and amuses with the details of an almost unbelievable scam. Amy and Abby, at least as they appear in this book, are like villains from a nineteenth-century melodrama: charming scoundrals, dazzling montebanks, an object-lesson in manic creativity gone awry.

Renne's book may not be "objective," but why should it be? She was involved. If anything, the simmering anger and wholesale rejection of an "unbiased" stance only add to the hilarity. And history, really, isn't written by the victors: it's written by those with enough determination and self-discipline to keep their arses firmly planted in a chair long enough do the job. She's done that, and created a thoroughly readable and entertaining book. Go read it, and urge any fellow afficiandos of true crime stories to do so as well. [4]

This is a self-published tome, and as such, it isn't perfect. There are points where the prose could use a little bit of polish, and the jumping back and forth in time can get a little confusing. But honestly, if Jeanine Renne can write something this gripping without an editor, I'd really love to see what she can do with one. I wasn't involved in the events discussed in this book at all and in fact have nothing to do with Lord of the Rings fandom, but this story has fascinated me ever since I first heard about it last December, and it's great to finally get the full scoop in one place. One of the best parts is the "appendices," which include transcripts of an Internet chat in which supposed "hobbit channeling" took place, and Amy Player's final "suicide note" to her parents. Anyone who's interested in pathological liars, what makes them tick, and how they succeed in making people believe them is going to want to read this book. [5]

this is a reasonable collection of some truly insane events that played out, both on- and off-line, centered around the Lord of the Rings films and actors. However, the author of this book was centrally involved in the insanity, and as the mere existence of this book should show, she's nowhere near able to look at it humorously, much less objectively. Part of what makes this story so interesting is the sheer ridiculousness of some of the cons--woman as reincarnation of Frodo Baggins? Elijah Wood on the run from the IRA?--and reading a book that is, in many ways, trying to be an excuse for the author's own behavior just doesn't give the story the treatment it deserves. [6]