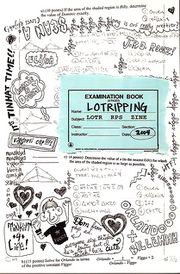 the cover of the Lotripping zine, art by Becca Ming

Lotripping is a zine produced in August 2004, containing stories and artwork in the Lotrips fandom. Hope, who was very active in the fandom, invited a selection of authors in the fandom to participate, and edited the work. The zine used Cafepress as a publication and distribution system. [1]

18 months following its publication, authors were allowed to publish their stories online.

From the zine introduction page:

Lotripping was conceptualised in November of 2003 and the recruiting of authors began the following month. although the original goal for publishing was May 2004, the task of writing, collating and editing such a volume proved to take longer than anticipated, and thus Lotripping ended up finally being available for purchase in August 2004.

There has been some controversy and discussion surrounding the circumstances of publishing this zine, but the editor maintains that Lotripping was made to create a 'slice' of fandom at a particular time and space, and is thus not at all objective, though it is intended to appeal to a relatively large body of fans.

Lotripping was not created as an anthology, or ultimate volume summing up the fandom's very broad life, and the editor strongly encourages other fans to engage in the experience of putting such a publication together themselves if they feel the urge to document their own corners of fandom.

From its cafepress page:

Synopsis: Lotripping: Lotrips Zine 2004 offers the reader not a definitive anthology collated at the end of a fandom's life, but a slice of experience from a particular generation of the Lord of the Rings real person slash fandom. Within you will find a collection of 24 Lotrips stories of exceptional quality covering a variety of themes, lengths, styles and characters that reflect the era they're written in celebration of, including angst, fluff, gen, AU, futurefic, illustrated drabble and the indomitable PWP... Whatever your poison, Lotripping is a volume that will continue to provide enjoyment through repeated readings, as well as a basic pleasure in the printed word within a community where it is generally considered obsolete. [2]

The zine has 24 pieces, including two illustrated drabbles.

The word count for the entire zine is approximately 111,000.

The project was first considered on November 4, 2003.

[Being sold at the base price means no profits were made by creators, but cafepress have collected $3404.64 on zine sales.] [3]

The stories range from G to NC-17 ratings, with a variety of genres including humour, PWP and AU. The characters in the zine rests mainly on the Hobbitsnorli - Elijah Wood, Dominic Monaghan, Billy Boyd, Sean Astin and Orlando Bloom. This garnered some criticism of the project, especially when coupled with the invitation-only method of gathering content. [4]