Last Outpost Of All That Is

Last Outpost Of All That Is is a slash Supernatural apocafic by gekizetsu in which Sam and Dean find themselves the only living humans left on earth.

The story was inspired by Alan Weisman's book The World Without Us and the later A&E TV documentary Life After Humans which showcased what would happen to the Earth if all the humans disappeared at once. It is considered a fandom classic and is one of the most notable fanworks for the Wincest ship (Sam/Dean).

The story was written in 2008 for the spn_apocasmut challenge and is 61,700 words long. Maygra later wrote a 3,440 word coda, Not for Samson in the Temple.

Rhea314 recorded a podfic of the main story and coda, which is hosted at the Audiofic Archive.

Several fan artists created fanart for the story and in the fall of 2011, after the story was recommended on Tumblr, it inspired a series of animated graphics with quotes from the story.

"The world begins with the interruption of a sleep. Which is why wakefulness is the only proof of existence. And why the world is fragmented and cannot achieve fullness. And why it constantly seeks to reconstruct fullness. In vain, because the discontinuous will never pass over into the continuous. Mathematics tells us that, last outpost of all that is." ~ Roberto Calasso, Ka

"The Last Outpost rips me to shreds emotionally. I DON'T KNOW WHY. JUST—JUST...AGH MY HEART."[1]

"'Over the years, the cities began to crumble. But Sam and Dean didn't. Final tally: 6.6 billion, minus two.[2]

"This is a fantastic story. It hits one of my favorite kinks, re the two of them all alone with no one else to rely on but each other - and the need they have for each other, wow. I absolutely loved that the apocalypse wasn't the point; it was the impact it had on SamnDean, and the aftermath on their emotional lives, which I think makes this story spectacular, because ...y ou gave them a world where they have to repurpose, to redefine, to be something new for themselves and to each other. In the emptiness, they are able to find each other. This is a gorgeous, emotionally laid-bare story."[3]

"Probably widely considered (one of) the best Wincest fic ever. Post-apocalyptic, and amazing."[4] 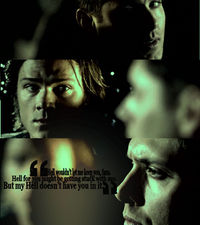 v3ttel's photo-montage for the story. The text reads: "Hell wouldn't let me keep you, Sam," Dean said. "Hell for you might be getting stuck with me. But my Hell doesn't have you in it."

"oh, man. wow. So powerful and brilliantly done. This story made me feel deeply, painfully sad. The whole world empty, and nothing but the two of them for each other; a kind of sterile Eden, with an silent end point somewhere in the distance. I really wanted the shadow going past the windows, the howling they sometimes thought they heard, to be a reason. Of course, because it isn't, the result is to make me share that wish along with Sam and Dean, viscerally. I love the two of them together and struggling, so very much -- and Dean's my 'Hell doesn't have you in it is true and perfect.'"[5]

"In the middle of the bedding department in Macy's." [6]

"This is why our fandom is made of absolute win...how to shatter the hearts of readers, grasp a character’s essence with seven words: 'Hell wouldn’t let me keep you, Sam' Ladies and gentlemen: Dean Winchester and his abiding love for his Sammy."[7]

"This is a fandom classic, and I'd be committing near-blasphemy if I didn't put it on this list, and rightly so. It's amazing and phenomenal and there really aren’t enough words in the English language for me to accurately describe how wonderful is."[8]

"so i’m reading the last outpost of all that is for the first time ever (why has it taken me this long ugh SO GOOD). my sister just opened the door and i told her that i’m reading an amazing fic while simultaneously watching the pilot and i’m on the verge of a mental breakdown, seriously. and she said “i’m going to let you marinate in your feelings” and left. probably for the best because i am feeling ALL THE FEELINGS."[9]

"who are you that you could do this and not be incapacitated by unbelievable amounts of pain forever how? the only explanation is magic."[10]

"This is a superb piece of writing. It is the pinnacle of Wincest fan-fiction, and nearly anyone who is interested in Wincest and its fan-fiction has read it or heard of it. If you haven't read it, you really should. It might break your heart at times, but it is truly a fantastic and satisfying and believable read. I go back to it again and again, sometimes reading it once every few months. It's like a favorite book."[11]

it's just one of the best Supernatural fanfics I've ever read. Possibly one of the best fanfics I've ever read, period. The way this author describes emotion, any sort of emotion, just makes me physically choke on my feelings. Also it's sexy as all get-out, but that's secondary, in a way, because it all stems from a depth of understanding of these two characters and their relationship that blows my mind.[12]

With hauntingly beautiful settings, perfect characterization, devastating (and downright funny) dialogue, The Last Outpost of All That Is is Wincest at its best and one of the most haunting fics I’ve ever read. It is an understated, slow-building, minimalist fic that is at once angst-ridden, light-hearted, and never boring. More than just a Wincest fic, however, it is a beautiful meditation on the nature of humanity and the legacy we leave behind when it all disappears.[13]

I could sing the praises of this wonderful, wonderful, story; the plot and story arc is to die for. For the most part, it's a story about the Winchesters: two brothers who try and survive the end of the world. All human beings have disappeared and the Winchesters have to learn to deal with the aftermath of the 'modern world' falling apart right in front of them. For the most part, this story is more plot then porn and even after the sex scenes are introduced into the story it's kept to a minimum. Besides being an amazing story in general, Gekizetsu did their research so this story really seems like a possible outcome for the survivors of the end of the world.[14]

Most of the art graphics posted on Tumblr contain key phrases from the story that moved the readers.