From Fanlore
(Redirected from Rare)
Jump to: navigation, search

Not to be confused with Rareshipping (Yu-Gi-Oh).

A rarepair is a term for a pairing or ship that is rare in a fandom. It is not featured in many fanworks and makes up a only small proportion of the overall total. A rare pair may be canon, but is often not. Some pairings may be shipped by a lot of fans, but be uncommon in fanworks. A rarepair may be a fan's OTP, or just shipped on the side.

Reasons for a pairing being uncommon include a lack of screentime or interaction in canon, one or both characters being unpopular in fandom, being a crossover ship, featuring an unpopular relationship dynamic (for example, age difference or incest), or the fandom base itself may be made up of people who prefer a different kind of ship – for example, a rare het pairing in a m/m slash-heavy fandom.

Poly ships are often considered rarepairs. The Leverage OT3 is an outlier and should not be counted. 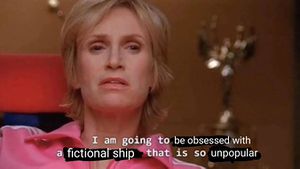