RWBY is a CGI animated series from Rooster Teeth. The title is pronounced "Ruby."

The end of Volume 3 is noted to be a turning point in the show, at which there are multiple character deaths, the stakes of the show change, and the tone becomes darker. RWBY Chibi was created as a spin-off for younger audiences after RWBY became more mature.[1]

There are a number of different fantastical elements/systems in the world of RWBY, known as Remnant. Dust is a crystalline or powdered energy source with a variety of qualities that is often used in weaponry or technology. Aura is the manifestation of a person's soul, which is trained and used primarily as protection from physical harm. Developing one's aura leads to unlocking a Semblance, a personal and unique ability with effects varying greatly from user to user, like a superpower. Remnant has two races of intelligent people, Humans and Faunus; Faunus are similar to Humans, except for the fact that they share certain traits with animals. They are essentially Kemonomimi, though they are generally restricted to one physical animal trait (e.g. a Faunus can have cat ears or a cat tail, but not both). It is later revealed that magic, which can only be used by a powerful few, also exists.

Major characters in the series include: 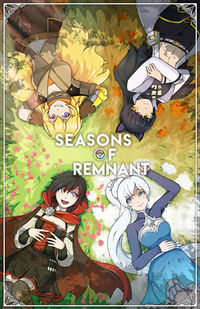 Team RWBY on the cover of Seasons Of Remnant

Much of the early RWBY fandom came from Rooster Teeth's already established fanbase and the following Monty Oum had. Monty was known in anime and video game communities for his fan animation, most notable his Dead Fantasy series, and so there was excitement when it was announced he would be heading his own series after finishing work on Red vs Blue. As the first four character trailers were released between November 2012 and June 2013, fans speculated on the characters backstories, personalities, and relation to each other. Due to the long wait between the first previews and the debut of the first season, there are already a not insignificant fandom that had expectations, interpretations/theories, and headcanons about the show, characters, story, tone, etc. From the earliest days of the post-V1 fandom, there was some dissent from fans who were unhappy that their expectations had not been met.

As with many Rooster Teeth productions, RWBY gained a large following after volume one was released, with nearly 2 million hits for the first episode on YouTube by the end of 2013.[2] The fandom that emerged after volume 1 also took to calling itself the FNDM, as a reference to the RWBY team naming style.

The show's creators encourage fan involvement, for example, by uploading a video about cosplayers of the series during volume one[3]. Monty also encouraged fans who wanted to make original characters by sharing the naming rules in the RWBYverse. 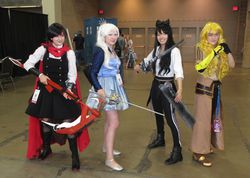 Fan theories also became very popular in RWBY, and has maintained throughout the duration of the series. Theories often involve analysis of the fairy tales or stories that characters are based on.

Several aspects of RWBY attract fans to the series, one popular example being RWBY's creator, Monty Oum, who was specifically known for his fluid fight animation. Many have stated to overlook weaker aspects of RWBY's storytelling due to overall enjoyment of its fight scenes.[4]

Another aspect enjoyed by fans is that RWBY's main protagonists comprise of four young women. This can be paired with the fact that RWBY is an action/adventure series that allows all of Team RWBY to be given the spotlight at different points in the story to show their fighting skills.

The series starting as an independent production that tries to capture the look and feel of anime is also a draw for some. With production being based in the US it is far easier for english-speaking fans to connect with its crew on social media or conventions, something that would normally require a translator for most anime fandoms.

These different aspects of RWBY that appeal to fans and their subsequent hopes and expectation for the series has been a major factor in the fandom division that came in the run up to Volume 3.

While the fandom has always critiqued various aspects of the RWBY the divide between vocal fans and vocal critics became far more apparent following the the untimely death of Monty Oum on February 1st 2015. In the immediate aftermath an outpouring of art and dedications were produced by fans as the future of the show was at that point uncertain.

After the initial sadness, shock, and worry for the show's future, from this point on, the tone of the fandom took on a drastically different timbre. Many tried to act much more positive with their views of the show than before, as if they all wanted in no way to wrong the man who made his dream a reality. But on the darker side, others abused Monty's absence as a pretense to confabulate what they think he would have wanted in order to bully and berate others. [...] And from V4 up to now, a noticeable rift has steadily been widening between the pieces of this community—though some are too quick to point it out, and others are skeptical of the problem's degree of enormity.[5]

The fandom is active on several platforms, besides Rooster Teeth's own forums it is also popular on Tumblr, Twitter, Fanfiction.net and Ao3. According to fandometrics on Tumblr, RWBY was #3 on the Top Web Stuff list in 2016.[6]. In 2017 and 2018, RWBY was the second most popular Web Series fandom on the platform.[7][8]

In November 2012, the /r/RWBY subreddit launched and became one of the most active communities. Fannish activities include a weekly "Fan Fiction Friday" (FFF) thread, and a Monthly Fanfiction and Fanart Contest (MonCon).

RWBY also has a dedicated YouTube community, with many channels producing episode reactions, news updates and video essays. Over time the reception to these channels has become mixed in other parts of the fandom due to a rise in negative commentary on the series. However, this line of thought has also received pushback as it can seem to be favouring uncritical commentary that only seeks to praise the source material.

Shipping is a huge part of the RWBY fandom. While there are juggernaut ships, multishipping is still very prominent and almost every pairing combination exists somewhere within the fandom.

The earliest shipping in the fandom came after the second trailer introduced Weiss. She was shipped with Ruby, being the only other character to exist at that point, though little was known about their personalities. The same happened once Blake and Yang were introduced in their trailers and it became common in the fandom to ship characters who are partners within a team.

Femslash makes up the largest proportion of the shipping fandom,[9] followed by a still sizeable amount of het and gen works. Male slash is by far the minority. White Rose and Bumbleby were the juggernaut ships within the fandom when the series first began, and are still some of the most popular ships. FanFiction.Net also has a larger amount of fanworks involving original characters than AO3.

The fandom's largest ship war is between two Blake ships: Bumbleby vs Blacksun.

The fandom's approach to pairing names has a lot of variation. Fans generally try to develop names based on characteristics of characters and how they would combine.

This started in the fandom's early days with ship names based off of the characters' trademark colors, such as Monochrome for Weiss and Blake's white and black color scheme, and Bumblebee for Blake and Yang's black and yellow color scheme. These color-based names became less common when the cast expanded, and there were fewer characters clearly identifiable by single signature colors. After some time, alternative spellings of common words came into use to make the ship names more easily searchable, such as Bumbleby developing from Bumblebee, or Cloqwork. Other ship names come from aspects like physical or character traits, often involving wordplay, such as Crosshares and Nuts and Dolts. However, there have also been portmanteau names that became standard, like Renora, Arkos, and Ironqrow.

Fans tend to start coming up with pairing names as soon as they start shipping a pair. Thus ship names can be created quickly with little context or knowledge of new characters. Often multiple names catch on at once, and ships usually don't have a single clearly favored name until they become significantly popular. Because many of the pairing names are not straightforward portmanteaus, fans have created numerous spreadsheets over time to catalogue every possible pairing name. Examples can be found here, here, and here.

The fandom hosts a fairly high amount of shipping week challenges throughout the year, primarily on Tumblr and Twitter. Many are annually events have have been run by the same mod team for a number of years, such as Bumbleby Week and Whiterose Week. Others are one time events, mostly for pairings involving characters not in the central cast, such as Catmeleon Week. Fans have taken to creating a calendar in order to keep track of each challenge.

RWBY has a large community of visual artists, writers, musicians, and animators, all of whom have contributed to fandom in their own ways.

Since Monty Oum was best known for his fan animations before moving to Rooster Teeth, many fans have been inspired to do the same with RWBY. These animations can be with the RWBY characters or OCs made to fit in the show's universe. Fan animations became more popular after the release of RWBY: Grimm Eclipse as the game models were ripped and ported to Source Filmmaker and MikuMikuDance. RWBY has strong support in the MMD community, with fans recreating characters and new outfits shown within the series as well as making original content.

RWBY has a huge array of artists producing fanart. The popularity of certain artists or pieces of fanart within the community has lead some official collaborations with Rooster Teeth.

In addition to regular fanart RWBY also has a number of run running comics/manga. 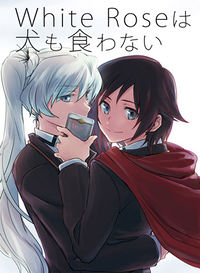 Cover of Even a Dog Won't Approach the White Rose

The Japanese RWBY fandom has a small but active community of doujin creators. Doujin's became more popular once RWBY was given a official Japanese dub and manga series. The fan event RWBY BANZAI!! has been held several times over the years and has been a source of many new doujin releases.

While more time-consuming in nature, there is also a sizeable amount of fangames being created for RWBY. Many of these games are visual novels as the genre is already popular within anime fandoms and the free game engine Ren'Py makes them relatively easy to make for newcomers. One of the most notable RWBY fangames is Grimm Eclipse, which went on to become an officially released Rooster Teath game.

RWBY has a small zine community, though it is not as popular a medium compared to other active anime fandoms, such as My Hero Academia. One of the first zines produced was Warriors of Remnant in 2016 after which a few zines have been released every year since, with a growing focus on shipping.