It has since come to take on a wider definition of changing any character's race or ethnicity from one source material to another (or from canon to fanwork) and, in opposition to the original meaning, often refers to characters who are canonically or popularly depicted as white being reimagined as minority ethnicities/characters of colour (also called Chromatic Recasting).

The website, Racebending.com grew out of the Livejournal community and both continued after the debut of the film moving on to broader activism, collection of resources and discussion.

The practice we’ve dubbed “racebending” on this site refers to situations where A) A movie studio/publisher, etc. has changed the ethnicity of a character B) with a resultant discriminatory impact on an underrepresented cultural community and actors from that community (reinforcement of glass ceilings, loss of opportunity, etc.)[1] 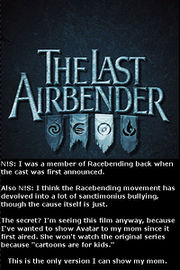 A user claiming that the Racebending movement has devolved into "sanctimonius bullying", posted to Fandom!Secrets.

Wider Use of the Term

The term has spread beyond the AtLA fandom, and been broadened to mean any racial re-working of a source in fanworks. For example, the Dreamwidth community Dark Agenda hosted a Racebending Revenge Challenge starting in 2010 whose prompt was:

"Re-write one or more white characters in the fandom(s) of your choice as chromatic/non-white/PoC, in a story of at least 500 words, with some acknowledgment of how the racial difference would make a difference to the story being told.

[...] We want to know how a man called Sherlock Holmes in Victorian England would function if his skin was the colour of soot, or what Latino Dean and Sam Winchester would do to convince people to trust them, and if Buffy the Vampire Slayer can be Asian and still save the world (a lot)."

The Racebending Revenge Challenge still continues and there is a collection dedicated to it at the Archive of Our Own.